The biotechnology industry in Taiwan underwent significant development and advancement in the first half of the year, driven by governmental policy support, according to the IEK-ITIS (Industry & Technology Intelligence Services) in Taiwan.

Official Policy Support
The Economic Committee of the Taiwan legislature amended the local patent law in April to allow patenting of flora and fauna, also adding clauses to regulate participants in local agriculture and husbandry, with such official support expected to strengthen the legal integrity of the biotech sector to encourage further development without participants' fear of being exploited and treated unfairly.

Backed officially, the Biomedical Technology and Product Research Center (BTPRC) was inaugurated on May 18 at the Hsinchu Biomedical Science Park (HBSP) in northern Taiwan, a major facility to accelerate biomedical industry growth in Taiwan, with the BTPRC under the National Applied Research Laboratories (NARL) being the first of the Park's three major sites to kick off operation. The other two planned centers include a national medical center set up by the Department of Health that will be handle clinical experiments and acute disease care; and an incubation center set up by the Ministry of Economic Affairs to integrate the links in the biomedical industry development chain.

The Taiwan Food and Drug Administration (TFDA) under the Department of Health announced the establishment of the Integrated Medicinal Product Review Office (iMPRO) on June 1 this year to integrate drug-review in Taiwan as well as the testing/inspection capacity of the TFDA and government-sponsored Center of Drug Evaluation.

As of the end of June this year, some 38 private companies in Taiwan have been certified as biopharmaceutical firms as stipulated in the newly enacted “Biopharmaceutical Industry Development Statutes,” and will likely win more support, opportunities from government to be instrumental to industrial development.

Except pharmaceutical cosmetics, plant seeds and animal vaccines, all biotech imports in the second quarter declined from a year earlier. 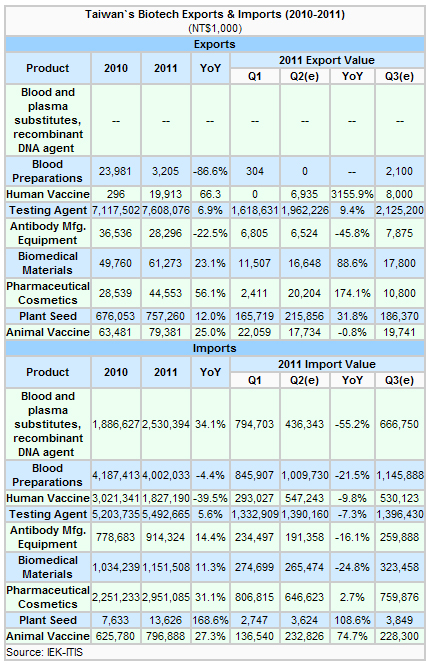 Status Quo
There are 72 biotech firms listed in the domestic capital market, including 15 on the Taiwan Stock Exchange (TSE), 24 on the Taisdaq, 24 on the Emerging Stock, and nine launching initial public offering (IPO).

Of the above public biotech firms, PhytoHealth Corp. registered the highest revenue growth in the first half due to a new drug launch in 2010, with SciVision Biotech Inc., Golden Biotechnology Corp. (GBC) and NBM Taiwan Inc. on the Taisdaq also reporting eye-catching results.

MicroBio Co., Ltd. is working on two new drugs, including the MS-20 in phase III and Phase II trials for enhancing natural killer cells in cancer patients and improving quality of life in liver cancer patients, and the Herbiron in Phase III trials to treat iron deficiency anemia.

In June 2010, MBC, after partnering with Progen Pharmaceuticals of Australia for 10 years, was licensed by its western counterpart to globally commercialize PI-88, which has anti-metastasis and anti-angiogenesis effects on cancer sufferers, with its phase II study showing PI-88's good safety profiles and promising effect to reduce tumor recurrence after surgical resection of early hepatocellular carcinoma (HCC).

TaiGen Biotechnology Co., Ltd. recently announced that its TG-0054, a chemokine receptor CXCR4 antagonist, has begun the Phase II trials in the U.S. and whole process is expected to be completed by the end of 2011, adding that the new drug can rapidly mobilize stem cells and endothelial progenitor cells in bone marrow to help cancer patients.

In April, Fountain Biopharma Inc. signed an agreement with Taiwan's Academia Sinica for the right to globally develop the Anti-CemX anti-allergy drug, which is in the animal trial stage and expected to be more effective to deter immunoglobulin (IgE).

BioLite Inc. signed a technical-transfer agreement with Taiwan's Industrial Technology Research Institute (ITRI) for the DLS-03 to treat rheumatoid arthritis and DLS-01 for enteritis, including teamwork to apply for FDA-certification.

Prospects
Taiwan's biotech sector is expected to continue along the same lines in the third and fourth quarters, with more interactions and partnerships among industry, academia and research institutes, as well as more private biotech companies to go public to raise capital.

With more official support as in the past, the planned Supera Incubation Center (SIC) in the HPSP is expected to uncover resources to develop more value-added biotech products.

To help finance the local biotech industry, the Taiwan Cabinet in August set up the Taiwan Medtech Fund (TMF) to invest in high-end medical devices.

Y.T. Jang, partner of Vertical Group and executive of TMF, says the fund aims to raise US$200 million, with over 10 investors showing interest so far and fund raising to be completed in a few months. The National Development Fund has invested 20% in the TMF, lower than originally promised 40%.

Industry experts say that the fiscal turmoil in the U.S. and Europe has discouraged industrial spending and driven many biotech and venture capital companies to emerging nations. Compared to other emerging counterparts, they say, Taiwan has better established capacity to develop medical-devices, backed by relatively better intellectual-property protection, as well as closer proximity to big markets as China and India.

An increasing number of local and foreign biotech companies are planning to go public in Taiwan to raise capital, IEK-ITIS says. The KY Group, a traditional Chinese medical chain clinic in Malaysia, is listed on the Taisdaq. In addition, Coland Pharmaceutical Co., Ltd., a top-three liver-drug distributor in China, and Epitomics, an American biotech company specializing in rabbit monoclonal antibodies, are scheduled to go public in Taiwan. ScinoPharm Taiwan, Ltd., the leading active pharmaceutical ingredients (API) manufacturer in Taiwan, has been certified and will be listed by year-end.

As interactions intensify among biotech and pharmaceutical operators in Taiwan and China to accelerate regulatory strengthening, exchanges, product/technology licensing, distribution etc., so are new opportunities created for Taiwanese companies in the massive Chinese market, with such trends helping to enhance resource integration between the two sides of the Taiwan Strait to facilitate Taiwan-China tie-ups in the global market, the IEK-ITIS concludes.