The market for smart TVs is expected to experience soaring growth in 2011 and 2012, and the latest technology shift to smart mobile terminals will sooner or later extend into this new market segment, according to the Topology Research Institute (TRi).

TRi, the largest private market research firm in Taiwan, recently noted that some 7.04 million smart TVs were sold globally in 2010 and predicted that the number would grow to 25.18 million this year to account for 10.4% of all TV shipments throughout the world. With an increasing number of brand vendors promoting such TVs, global shipments are expected to continue increasing rapidly to reach around 52.85 million units in 2012, growing 100% for the year and accounting for 20% of all TV shipments.

C.W. Chang, TRi's research manager, points out that in the post-PC era, consumer electronic products will continue to evolve and the Smart TV is expected to be the final battlefield in which user interface, gaming function, Internet browsing, OTT (Over-the-Top) Video, social networking, and search tools will be the deciding factors in market success. Social-network functionality is expected to be the killer application.

Like a smartphone, a smart TV offers a number of "internet connected services" that normal TV sets cannot provide. It has the equivalent of a computer built into it, giving users a greater number of services such as apps, media streaming, web browsing, games, Internet Protocol Television (IPTV), and many others. 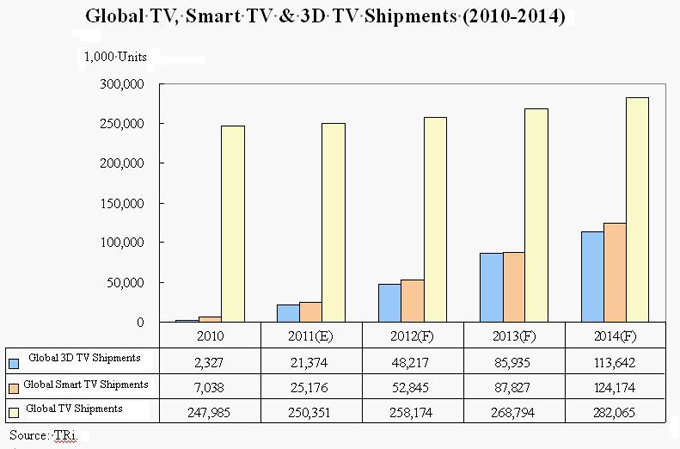 "Social TV"
Social networking has rapidly overwhelmed the mobile device market, TRi says, and of course it will become a popular application for TVs as well. For the smart TV models offered by all major brands, TRi says, social networking and sharing are the two leading functions. All major suppliers, including Samsung, Sony, LG. Sharp, and Philips, have added various social-networking application programs such as Facebook, Twitter, Google Talk, and Skype to their latest models. Watching the TV is without doubt a part of social networking today, TRi says, noting that during the Super Bowl football games in February this year, 4,064 new Tweets were generated each second by the audience, and all the top-four TV networks--ABC, NBC, CBS, and FOX--introduced various types of TV programs or services on different social network media.

The social networking application has pushed the smart TV into a new stage of development, transforming it from a device providing OTT/VoD (Video on Deman), video streaming, realty shows, Flash video, TV Apps, and 3D programs to a social network-oriented device that can integrate more users, movies, and social-networking tools as well as various types of devices and application software. The so-called "Social TV", according to TRi, is a combination of smart TV, tablet PC, and smartphone along with direct-broadcast audio/video contents and social-network software, creating a social-centric ecology. Only through this kind of concept, the research firm says, can smart TVs meet the needs of younger consumers and enjoy explosive sales growth.

Three Camps
At least three camps have formed, or will form, following the advent of the smart TV, with the brand vendors in each camp being able to share their application software and content on the same platform, TRi comments. 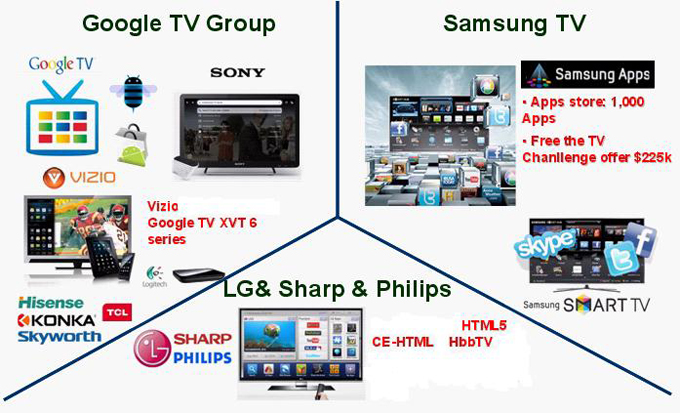 With about 1,000 application programs and more than 10 millions downloads, Samsung's smart TV is expected to form a camp all by itself. The Google Android camp is expected to be formed by major firms such as Sony and Vizio together with the leading Chinese TV vendors Hisen, TCL, and Konka. The third smart TV camp is expected to include LG, Sharp, and Philips, which are based on the HTML5, CE-HTML, and HbbTV languages. In addition to popular application programs, TRi stresses, the volume and quality of video and audio content provided by TV vendors will be another decisive factor in the coming smart TV wars.

For success in the "Smart Everything" era, TRi says, each smart device will have to provide its own key content and services, meaning that smart TV vendors will no longer be able to rely on pure TV-set sales but will need cross-industry resource integration through acquisitions or strategic alliances with partners in different fields. Specifically, TRi says, hardware + software/interface + content/service as well as smartphone + tablet + smart TV have gradually been evolving into the most important business model in the "Smart Everything" era.

Taiwanese companies are currently focusing mainly on manufacturing smart TV-related hardware products, and the burgeoning of the smart TV market is expected to benefit the island's TV-chip developers and TV assemblers. At the same time, with the integration of TV and other smart mobile devices, tablet PCs and smartphones are replacing traditional TV remote control devices. This market shift is expected to create new opportunities for companies in Taiwan to make use of their accumulated R&D strength as well as information technology (IT) product manufacturing capability and know-how to achieve a new wave of success in the TV input-interface segment.