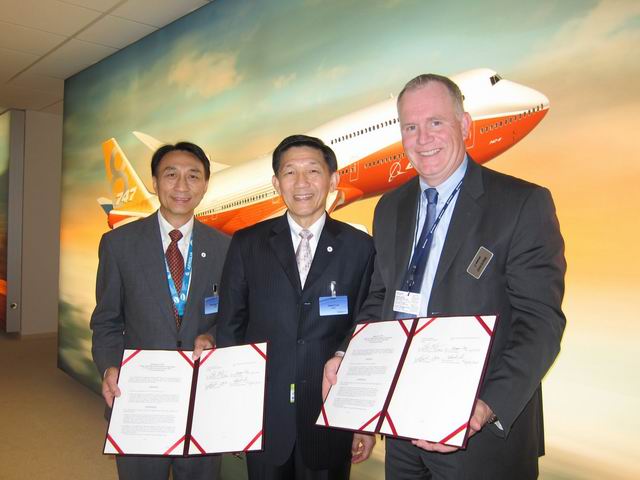 The MOA signed between representatives of AIDC and Boeing during the 2013 Paris Air Show. (Photo courtesy of AIDC)
AIDC's senior vice president George Fung signed a Memorandum of Agreement (MOA) with representatives of U.S. aircraft maker Boeing Co. during the air show. The MOA is expected to authorize the Taiwanese aircraft maker to produce horizontal stabilizer tips, strakelets, and body seal packages for the Boeing 787-9 Dreamliner, as well as to extend the contract to let AIDC continue providing Boeing with related pressurized doors for the Next-Generation 737 and the Boeing 737 MAX. The signing process was witnessed by AIDC's chairman Jason Liu, AIDC said.

AIDC has been manufacturing pressurized doors for the Next-Generation 737 and Boeing747-8 since 2003. The Taiwanese aerospace company said it has been recognized by Boeing as a reliable and high quality supplier, and was presented the Silver Boeing Performance Excellence Award in 2011 and 2012.

AIDC chairman Liu said that AIDC is both pleased and proud to have received the Boeing order and to extend cooperation between Boeing and AIDC. He further expressed that AIDC is confident and fully prepared to meet the needs of current and future programs.

The Boeing 737 MAX is a new-generation medium- to short-range jetliner and an upgraded version for the existing B737. The new model, scheduled to enter the market in 2017, was developed mainly under the considerations of lower fuel consumption and repair/maintenance costs. 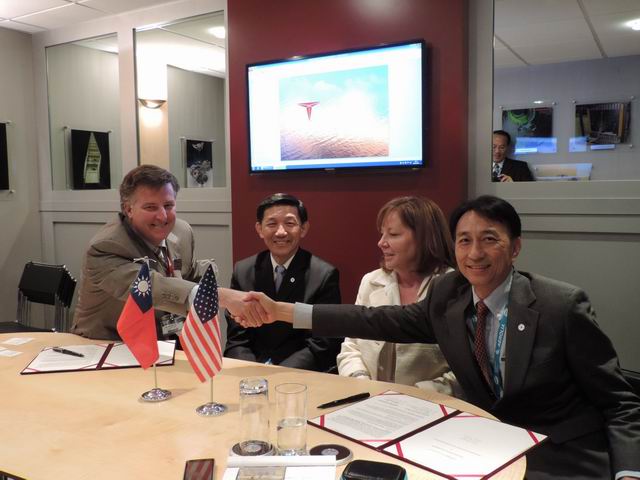 During the air show, AIDC also signed an agreement with TA-VAD to supply main landing gear doors (MLGDs) for the Bombardier Global 7000 and Global 8000 business jets. (Photo courtesy of AIDC)
The agreement was signed by AIDC's senior vice president Fung at a ceremony held on June 20.

The Global 7000 and Global 8000 are new-generation business jets slated to enter service in 2016 and 2017, respectively. TA-VAD selected AIDC as a supplier after over six months of evaluations, AIDC said.

AIDC's chairman Liu commented that AIDC is proud to receive the contract and anticipates that the parts made by AIDC will contribute to the ultimate success of the Global 7000 and Global 8000 aircraft program. He furthered to expressed AIDC's hope to extend cooperation with Triumph Group to boost the continuing development of Taiwan's aerospace industry.

BR710 Engine
During the 2013 Paris Air Show, AIDC also signed a contract with Roll-Royce (RR) of the U.K. to produce rear outer cases for the BR710 engine combustors.

AIDC expects the new RR order to contribute about US$15.6 million to the company's revenue from 2013 through 2022.

RR is one of the top-five aircraft engine manufacturers in the world and a leader in the wide-body aircraft engine market. RR first selected AIDC as the supplier of its V2500 engine front split casings in 2004. AIDC also became a strategic partner of RR in 2009. AIDC said that RR and AIDC are cooperating on a concurrent engineering program for the Trent XWB Engine, which will be used on the Airbus A350.

According to AIDC, the LEAP 1B engine will substitute the popular CFM56 engine series and be used on the Boeing 737 next-generation commercial planes. AIDC expects the new LEAP engine business to contribute revenue of approximately US$20 million from 2013 through 2017.

GE Aviation is an important customer of AIDC. In addition to the CFM56, CF34, CF6, GP7200, GE90-115B and GEnx engine components manufacturing business initiated in the early stages, AIDC has established new business with the GE Aviation for new-generation engines, including the recent Passport 20 and LEAP engine engineering programs.