Bosch recently announced a major advancement in active motorcycle safety technology that is expected to change the image of motorcycling as a dangerous activity. 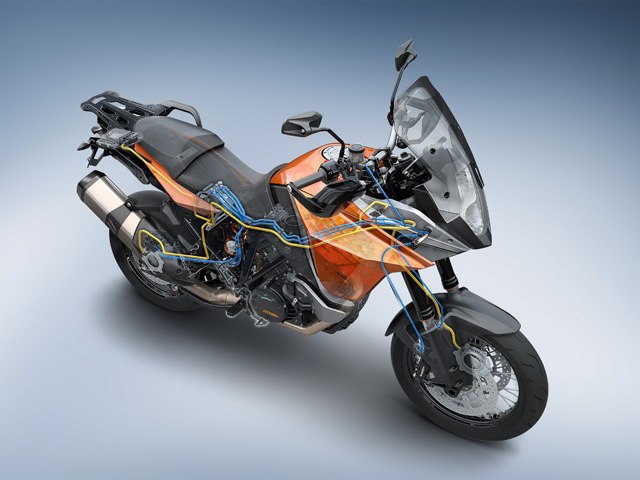 The Bosch MSC ensures the best possible stability in all riding situations.
The global automotive tier-1 supplier claimed that it has developed world's first brake control system for motorcycles. The motorcycle stability control (MSC) ensures maximum stability in all riding situations and supports bikers during braking, accelerating, straight riding and cornering, all without compromising the motorcycle's handling or the pleasure of riding, the company says. 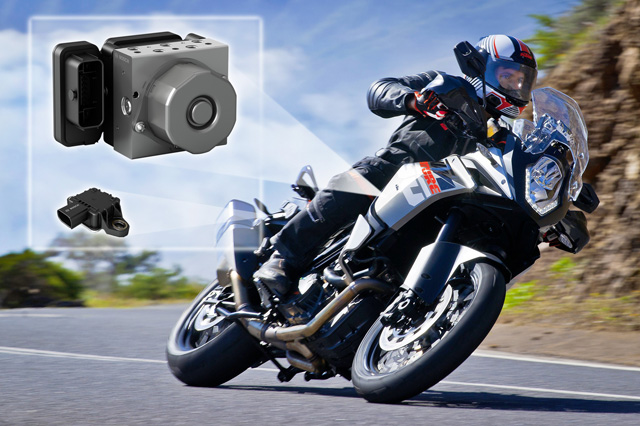 The safety control system precisely control the braking forces in front and rear wheels based on computer algorithms. (System pictured on the 2014 model of the KTM 1190 Adventure)
"Almost one in two fatal motorcycle accidents occurs in a bend," says Gerhard Steiger, president of the Bosch Chassis Systems Control division. "The Bosch MSC motorcycle stability control can help further reduce the number of accidents." In 2010, more than 5,000 motorcyclists died in road accidents in Europe alone. Studies show that an anti-lock brake system (ABS) can prevent about one-quarter of all motorcycle accidents that lead to injury or death. The new stability control will increase this number even further.

"The technical basis of the MSC is the ABS enhanced system for motorcycles," says Fevzi Yildirim, head of the Bosch center of competence for powered two-wheeler safety in Japan. "The new functions are made possible by an extensive array of sensors and sophisticated software." This system offers motorcycle manufacturers and their demanding customers a whole range of safety functions:

1. The lean and pitch angle-dependent ABS control improves riding stability in all riding situations as well as braking effectiveness.

2. The traction control regulates the maximum engine torque so that even on variable or slippery road surfaces, the driving force is efficiently transferred to the road and the drive wheel does not lose its grip.

3. When braking heavily in curves, the MSC reduces the motorcycle's tendency to return to an upright position. This involuntary righting of the machine leads to a larger cornering radius, which often results in the motorcycle leaving its lane. In these situations, the eCBS (electronic combined brake system) creates the best possible distribution of brake force between the wheels, and thus stabilizes the bike during cornering.

4. The MSC also reduces the risk of 'lowsiders'. These are accidents in which the motorcycle capsizes during cornering and the wheels slide out toward the outside of the bend. They occur when too much brake force is applied during cornering and the wheels are not able to transfer sufficient side force onto the road. MSC counteracts this by detecting the risk of a lowsider and limiting the maximum brake force. The eCBS function distributes this maximum available brake force between the wheels, ensuring the best possible brake performance under cornering conditions.

5. The eCBS function ensures optimum distribution of brake force at all times – even when the biker mistakenly uses only one of the two brakes, or brakes with too much force.

6. The wheelie-mitigation controls the engine torque, preventing the front wheel from lifting uncontrollably and at the same time ensuring maximum acceleration.

6. The rear-wheel lift-up mitigation function keeps the rear wheel on the road by reducing the maximum brake force on the front wheel when riding on surfaces with high friction coefficients. Riding stability is maintained, taking pitch rate and longitudinal acceleration into account.

Bosch's motorcycle stability control uses an extensive array of sensors to register the driving dynamics of the machine. Wheel sensors measure the rotational speed of the front and rear wheels, and an inertia sensor module computes the vehicle's lean and pitch angles more than 100 times per second. By analyzing the sensor data, Bosch says, the difference in speed between front and rear wheels, as well as other motorcycle-specific parameters such as tire size, tire shape, and sensor location, the ABS control unit calculates the physical limits of brake force on the basis of lean angle.

If the motorcycle stability control recognizes that a wheel is starting to lock, the ABS control unit activates the pressure modulator in the hydraulic brake circuit. This lowers the brake pressure and builds it up again within a fraction of a second, with the result that exactly as much brake pressure is applied as is necessary to keep each wheel from locking.

For motorcyclists, the Bosch MSC can be a lifesaver. However, just like ABS, it cannot suspend the laws of physics. In particular, extreme misjudgment of the riding situation and major errors on the part of the biker can still lead to an accident. Nonetheless, the system supports bikers in borderline situations, helping them get more out of their motorcycles, while keeping them much safer at the same time.