Although Taiwan Semiconductor Manufacturing Co. (TSMC) was ranked the world's No.2 chipmaker in 2013 in terms of installed silicon-wafer capacity, next only to Samsung, it unseated Intel as the world's No.1 supplier of logic ICs, according to market consultant IC Insights, which recently released its 2013 rankings of the world's top-10 chipmakers.

IC Insights' report showed as of December 2013, Samsung had the most installed wafer capacity with nearly 1.9 million 200mm-equivalent wafers per month, representing 12.6% of the world's total capacity. The South Korean chipmaker used most of its capacity for the fabrication of DRAM and flash memory devices.

Next in line was TSMC, the world's largest pure-play foundry with about a monthly capacity of 1.47 million 200mm-equivalent wafers, or 10.0% of total worldwide capacity. The company used almost all of its capacity for logic IC production last year.

Only five years ago, Intel remained the world's No.1 logic-IC maker. However, over the past five years, the company has systematically phased out its 200mm wafer capacities that failed to keep up with its most advanced process technology for microprocessors. As of December 2013, the company's total capacity shrank to 961,000 200mm-equivalent wafers.

Last year, the world's top three pure-play foundries—TSMC, GlobalFoundries Inc., and United Microelectronics Corp. (UMC)—were ranked in the top 10 listing of capacity leaders. In total, the three companies have held about 80% of the world's pure-play foundry market since 2010, with a combined capacity of about 2.5 million wafers per month as of December 2013. Their total capacity constituted about 17% of the world's total wafer-fab capacity, suggesting that the integrated-device manufacturing model has been increasingly replaced by pure foundry.

IC Insights feels that IC manufacturing is increasingly becoming a high stakes poker game with enormous up-front costs because, today, it costs US$4.0-5.0 billion for a high-volume state-of-the-art 300mm wafer fab and the cost to build tomorrow's 450mm wafer fab will probably be double that. Despite the cost-per-unit area advantage that larger wafers provide, there are fewer and fewer companies willing and able to continue investing that kind of money. (KL) 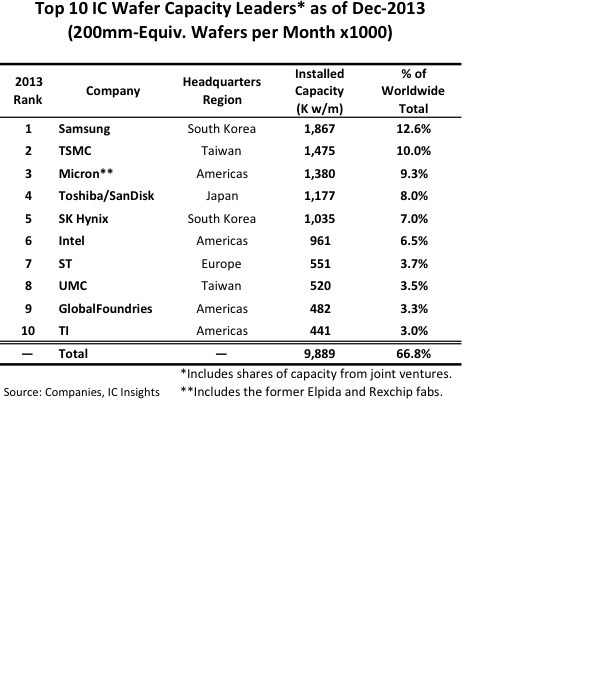