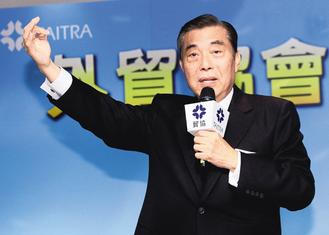 TAITRA's chairman C.K. Wang.
Industry sources said that China has been the most important market for Taiwanese TFT-LCD makers' TV-panels, so declining demand from across the Taiwan Strait will surely impact local panel suppliers'  profitability.

Wang made the statement at TAITRA's year-end press conference, adding that such revelation came from a talk in late 2013 with Bai Weimin, vice chairperson of China Video Industry Association (CVIA).

According to Wang, Bai told him that several Chinese panel suppliers, including Beijing BOE Optoelectronics Technology (BOE OT), China Star Optoelectronics Technology Corp. (CSOT, a business group of TCL Corporation), and Korean player Samsung have in-turn added new-generation panel production capacities in China in the second half of 2013, so the annual Chinese TV-panel procurement volume from Taiwan will not likely remain as  high as in previous years.

Industry insiders pointed out that Bai has led Chinese TV-panel procurement delegations consisting of representatives of major Chinese TV vendors to Taiwan every year since 2008. Wang told reporters that TV-panel procurement volume in 2014 will be clarified when he goes to Beijing in March for a personal discussion with Bai.

Though TV-panel procurement from China might drop in 2014, TAITRA said that it will direct efforts toward the Association of Southeast Asian Nations (ASEAN) to invite regional TV makers to Taiwan. Some members of the delegation to be invited have been confirmed, and as early as in the first half, TAITRA will welcome the ASEAN procurement delegation.

Wang also urged cooperation between Taiwan and China in the 4K2K, or UHD (Ultra High Definition), TV panel business, that some Taiwanese panel suppliers have such technologies, which Chinese panel makers can tap with big production capacity. So, he said, related parties on the both sides of the Taiwan Strait should jointly map out common standards or product brands for future business development.