The year 2014 is a pivotal period for tablet PCs as the traditional markets leading computing and consumer electronics (CE) deployments reach a tipping point and give way to growth regions, according to market intelligence company ABI Research. 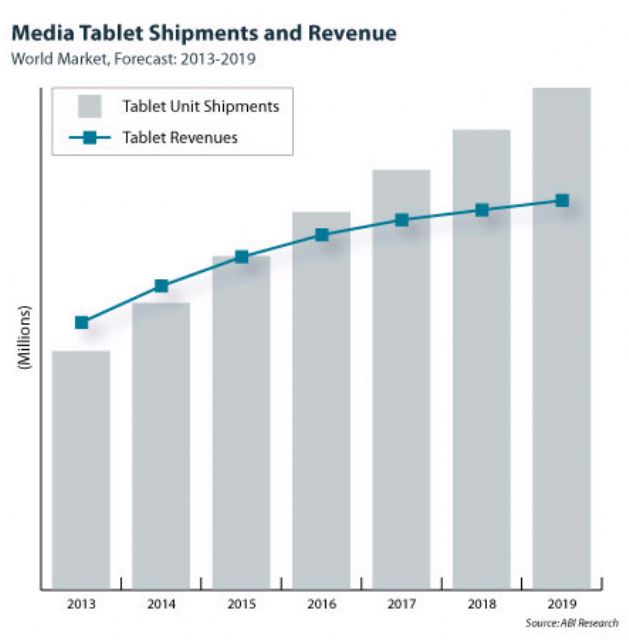 The most mature markets, including North America, Western Europe, Japan and South Korea, are yielding to other regions, such as Latin America, Eastern Europe, Middle East and Africa, where the connectivity infrastructure and distribution channels are coming of age. ABI Research forecasts branded tablet shipments at 200 million units for this year—a 20% gain year-over-year (YoY) from the 166 million shipments in 2013.

With more choices than ever for mobile computing, consumers and businesses will weigh the role of tablets along with ultraportable PCs and large-screen smartphones (the so-called phablets) to satisfy their communications and computing needs. But 2014 will be anything but status quo for tablet suppliers. ABI Research said.

“If Intel is able to achieve its goal of 40 million tablets with its processor technology, the silicon vendor will suddenly become a significant player,” says senior practice director, Jeff Orr. “One of the greatest opportunities this year is for development, manufacturing and marketing of tablets on a regional and even local level, which shakes up the vendor ecosystem of the past four years. Partnerships and deals struck this year will be key for the next few years of tablet adoption.”

Since 2010, the tablet market has been led by North America and its affinity with Apple's iPad. ABI Research predicts North America will drop below 50% of all branded tablet shipments for the first time. Continued efforts by Apple, Samsung, and other OEM vendors to find favor in growth markets will result in new distribution channels for retail, network operators and e-commerce, the research firm said.

IDC's ForecastWithout concerning the brands, another global market intelligence firm International Data Corporation (IDC), forecast recently that global tablet market, inclusive of both tablet PCs and 2-in-1 devices, is forecast to grow 19.4% in 2014, down from a growth rate of 51.6% in 2013.

The market research firm reduced the 2014 forecast by 3.6% from its previous projection to 260.9 million units worldwide. The reduction in the short-term forecast was due to slowing consumer purchases as hardware iterations slow and the installed base—particularly in mature markets—continues to grow.