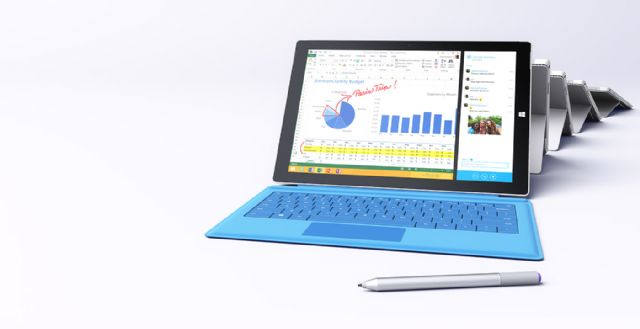 Industry experts say that products with larger screens--like Microsoft's new 2-in-1, the 12-inch Surface Pro 3— are expected to play a greater role in the market going forward. (photo from Microsoft website)


Due to greater decline in demand than predicted in the first quarter of 2014 and concerns that tablets and 2-in-1s (laptop-tablet hybrids) will face additional market challenges during the rest of the year, International Data Corporation (IDC) has lowered its 2014 worldwide tablet plus 2-in-1 forecast to 245.4 million units, down from the previous forecast of 260.9 million units.

"Two major issues are causing the tablet market to slow down. First, consumers are keeping their tablets, especially higher-cost models from major vendors, far longer than originally anticipated. And when they do buy a new one they are often passing their existing tablet off to another member of the family," said Tom Mainelli, Program Vice President, Devices & Displays at IDC. "Second, the rise of phablets – smartphones with 5.5-inch and larger screens – are causing many people to second-guess tablet purchases as the larger screens on these phones are often adequate for tasks once reserved for tablets."

In the past year alone, the tablet share of smartphone shipments has more than doubled, from 4.3% in the first quarter of 2013 to 10.5% in the first quarter of this year, representing 30.1 million units shipped, IDC pointed out. As large phones clearly impact near-term tablet growth, IDC expects the market to rebound by shifting its focus back toward larger-screened devices. Products with larger screens--like Microsoft's new 2-in-1, the 12-inch Surface Pro 3— are expected to play a greater role in the market going forward.

"The shift back toward larger screens will mark a welcome sea change for most vendors as the average selling price for these devices will remain roughly 50 percent higher than the average sub-8-inch device," said Jitesh Ubrani, Research Analyst, Worldwide Quarterly Tablet Tracker. "Microsoft is also expected to benefit from this shift as the share for Windows-based devices is expected to double between now and 2018."