Advantech Corp., Taiwan's largest supplier of rugged and industrial PCs and embedded systems by shipment, chalked up consolidated revenues of NT$9.121 billion (US$304.03 million) in the third quarter of this year, just 1.6% less than the company's all-time quarterly high of NT$9.278 billion (US$309.26 million) recorded during the previous three-month period.

Institutional investors are predicting a significant jump in Advantech's net profit for Q3, perhaps even setting a new single-quarter high, partly because of foreign exchange income from the appreciation of the Renminbi. They also believe that Q4 revenues will remain at the NT$9 billion level.

Advantech's president, Chaney Ho, reported that the number of engineers employed at the Advantech Plus Technology Center (A+TC), which was established last year in Kunshan, a city in Jiangsu Province, has topped 300, most of whom are engaged in the development of products for markets in China and other emerging countries, such as Brazil. Meanwhile, the company's R&D team in Taiwan is concentrating mainly on the development of products for sale in Europe and the U.S.

Ho confirmed that in consideration of the fact that Europe is the world's major market for the IOT (Internet of Things) applications that are sustaining Advantech's current growth momentum, whereas its products are still unable to match the quality of competing models from European suppliers such as ABB and Schneider, his company is thinking about setting up a new R&D team in Germany to concentrate on the automation control technologies needed to help tap the high-end segment of the European market. (SC) 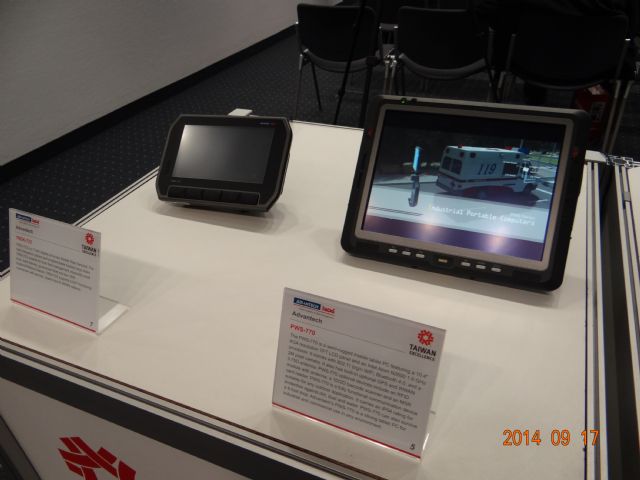 Advantech’s GPS-supported Onboard PCs were displayed at a German trade fair in mid-September.