More than 20 million on-cell thin film transistor-liquid crystal display (TFT-LCD) touch panels were shipped globally in the first half of 2014, compared with just 4.7 million in all of 2013, thanks to their adoption in the expanding entry-level and mid-range smartphones market, according to NPD DisplaySearch, a display-market research firm. NPD expects global shipments of the panels to reach 129 million in 2018. 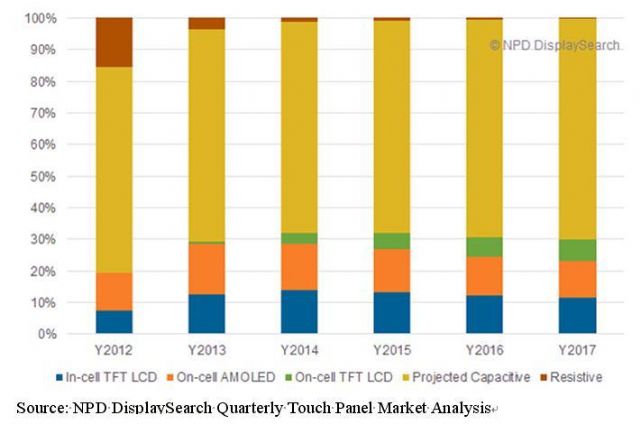 Embedded touch panels of all types, including in-cell and on-cell TFT-LCDs as well as on-cell active matrix organic light-emitting diode (AMOLED) panels, accounted for 20% of all cellphone displays shipped in 2012 and 29% in 2013, and this year the figure is expected to reach 32%. "Overall, the total embedded touch panel display market is expected to grow," said Calvin Hsieh, NPD's research director. "However, the shares of shipments by individual manufacturers will depend on Apple and Samsung, since they are the biggest customers for in-cell TFT-LCDs and on-cell AMOLED panels."  Other brands tend to use on-cell TFT-LCDs.

With the maturity of the smartphone market, consumers have come to expect more features and functions at lower prices, pushing Motorola, Huawei, and other brands to adjust their product strategies. “These brands are now cultivating the supply chain for additional touch-embedded panel sources as they adopt on-cell TFT-LCD solutions and focus on the entry-level and mid-range smartphone segments,” Hsieh noted.

According to Hsieh, the Taiwanese panel suppliers Innolux, CPT (Chunghwa Picture Tubes), and HannStar, the Chinese manufacturer Tianma, and other panel makers that shipped on-cell TFT LCD panels in the first half of 2014 used single-layer patterning in order to save on photo-mask fees and to boost yield rates. "The initial success of on-cell TFT LCD brings great hope to panel makers that are looking to compete with touch module makers," Hsieh commented. "On-cell TFT LCD certainly helps suppliers of embedded products increase their share of shipments. However, add-on types still possess sufficient supplier sources, affordable prices, and flexibility."