Taiwan's Bio-economy to Generate Revenue of US$106 M. by 2020: Taiwan Cabinet 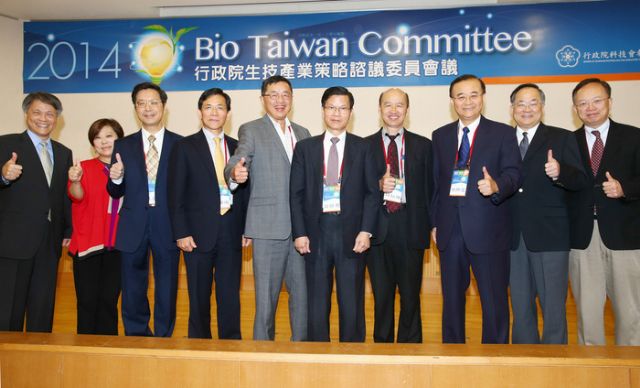 VIPs at the opening ceremony of the 2014 BTC meeting. (photo from UDN)

At the 2014 Bio Taiwan Commission (BTC) meeting, the Taiwan Cabinet forecasts that with its policy support the bio-economy in Taiwan could generate annual revenue of about NT$3.18 trillion (US$106 million) by 2020.

The Cabinet also announced promoting the development of international long-term healthcare industry on the island, to further expand production value of non-national health insurance businesses. The government plans to set up 22 specialized healthcare centers throughout Taiwan and develop cross-industry alliances in related fields for joint international marketing. Once the long-term healthcare insurance is put into effect on the island, the overall annual production value from the sector is expected to top NT$100 billion (US$33.3 billion) from only NT$4 billion (US$133.3 million) now.

A senior official of the Board of Science and Technology under the Cabinet says that the bio-economy in Taiwan covering healthcare, industry and agriculture etc. segments generated annual production of NT$2.09 trillion (US$69.7 billion) in 2013, but could, with governmental policy support, increase 1% yearly until 2020 to about NT$3.18 trillion (US$106 million). And the government will select high-potential, technology-oriented segments with high possibility to create industries and value chains for special development, with a  major bio-economy conference scheduled in H1, 2015.

In addition, MOHW says, the government targets promoting the international healthcare industry on the island by promoting healthcare tourism, which aims to set up 22 specialized clinics for cardiovascular, infertility treatments to attract more international travelers looking for cost-effective solutions. The government also aims to raise local-content of medical techniques and equipment at the clinics to at least 70%.

C.H. Tsai, chairman of China Medical University in central Taiwan, suggested during the BTC meeting that the government should set up international healthcare zones in northern, central and southern Taiwan to form clusters, backed by cross-industry alliances between medical equipment, pharmaceutical, tourism and insurance companies for stronger, integrated competitiveness. The government is the main proponent of  development of local healthcare industry and related industrial alliances by providing necessary incentives to tap the massive Chinese market, likely the main client source for Taiwan.

The Council of Agriculture (COA) under the Cabinet said the island's overall agro-production value in 2013 was NT$481.3 billion (US$16.04 billion), including NT$230.5 billion (US$7.68 billion), or 47.9%, from the farming sector. In the future, the COA said, agro-biotechnology will focus on functional agro- products, animal vaccines, biotechnology pesticide and fertilizers etc.