Suppliers of thin film transistor-liquid crystal display (TFT-LCD) panel are stepping up large-sized (larger than 9-inch) panels business this year amid rising demand for key applications. According to the latest DisplaySearch quarterly report, TFT panel suppliers are forecast to ship 718 million large-sized panels, up 3% year-on-year (YoY). Due to recent panel price increases and  larger average area sizes for TVs, large-sized TFT-LCD revenue is forecast to reach US$75 7 billion in 2014. 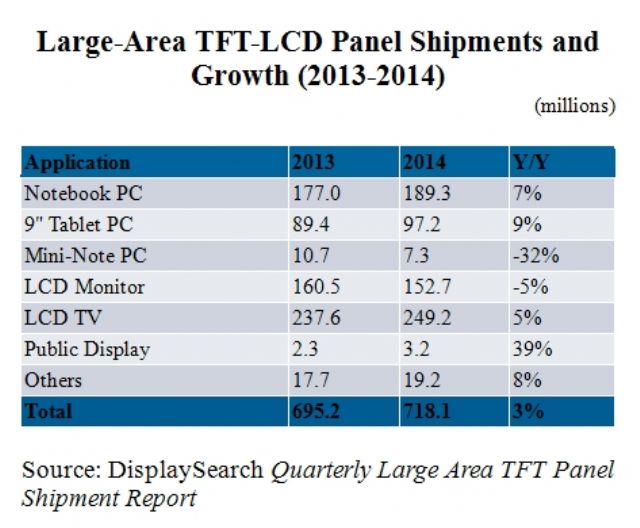 David Hsieh, vice president of the Greater China market for DisplaySearch, said 2013 was the first year that large-sized TFT-LCD panel shipments and revenues declined, with a market rebound beginning in Q2, 2014  enabling panel makers to realize  business plans. Strong growth in  average sizes of LCD TVs with inventory shortages in those sizes have transformed the industry landscape, enabling panel makers to increase prices and expand shipment volumes, he added.

According to DisplaySearch, LCD TV panel shipments reached a historic high of 64 million units in Q2, 2014 to reveal stronger-than-expected momentum in downstream inventory preparation. The following quarter, shipments were even higher, reaching a new record high of 65 million units.

Shipments for OLED panels for high-resolution tablet PCs (e.g., 280-360 ppi) are expected to reach 5 million units in 2014, a new milestone for the category.

According to panel makers' business plans, shipments of notebook PCs and mini-note panels are forecast to reach nearly 197 million units this year, up 5% from 213. In H1, 2014, panel makers' conservative estimates for notebook PC panels had induced a shortage.

The market for LCD public displays is expected to grow 39% this year, due to the demise of plasma display panels and the strong momentum for digital signage. Hsieh noted that industrial applications and soaring growth in larger automotive displays is also pushing large-sized TFT growth.