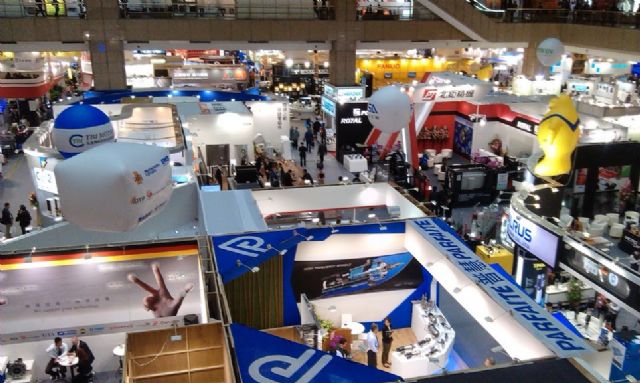 Goodway estimates its earnings for 2014 at NT$6.5-7 per share, compared with NT$3 or so projected for AWEA in the same year.

The Tongtai Group targeted to land around NT$1 billion (US$32.25 million) of orders at the show. It already had over NT$2 billion (US$64.51 million) of undelivered orders before the show, which will keep the company's production lines humming at least until June or July this year.

Falcon Machine Tool Co., Ltd., the owner of the Chevalier brand, secured more than NT$300 million (US$9.67 million) of orders during the show and estimated follow-up orders to swell the number to NT$450 million (US$14.51 million).

Before the show, the company already had some NT$400 million (US$12.90 million) of undelivered orders, including around NT$40 million (US$1.29 million) of orders for computer numerical control (CNC) grinding machines from mainland China's manufacturers of vehicle engine rotaries and NT$40 million plus orders from mainland China's manufacturers for a total of 16 horizontal lathes and machining centers. These orders will keep the company busy until this July.

Shieh Yih Machinery Co., Ltd. executives say the company received NT$200-300 million (US$6.45-9.67 million) of orders only halfway through the trade show. Before the show, the company had NT$2 billion (US$64.51 million) of orders, including the orders from carmakers and household-appliance makers to be delivered from the second quarter through the final quarter this year.

Hiwin Technologies Corp., reportedly Taiwan's No.1 maker of ballscrews and linear guideways, says it has received increased orders for its ballscrews, linear guideways and industrial robots since the first quarter of last year due to economic recovery. The company's consolidated revenue for the first two months of this year amounted to NT$2.31 billion (US$74.67 million), up 20.01 percent year on year, prompting industry executives to forecast the company's consolidated revenue for 2015 to likely to increase 10 percent year on year to top NT$16 billion (US$51.61 million).
(KL)