TIMTOS 2015 in Taipei Revolves Around Technologies Designed for "Smart Manufacturing" 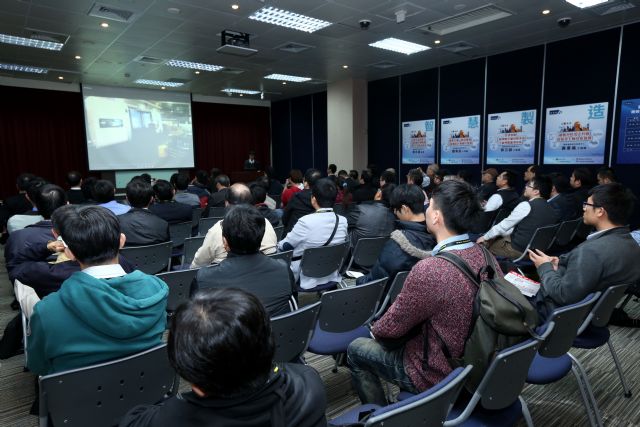 A forum on Smart Manufacturing at TIMTOS 2015 draws visitors.

In the forums held alongside this show, specialists forecast that Industry 4.0 to be the next battleground for global industrially advanced nations to combine robots, Internet of Things (IOT), and automated production lines. Also, smart factory developed on Industry 4.0 will gradually replace traditional production lines and provide Taiwan's manufacturing industry a chance to upgrade. 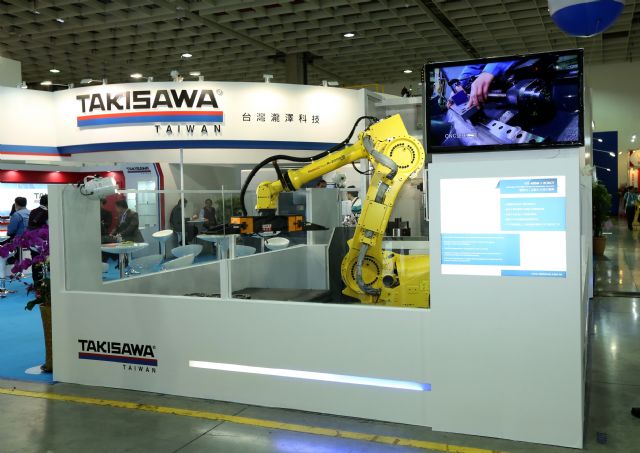 Robotics is core to Smart Manufacturing.

This year, jurors of the Taiwan Machine Tool Industry Award 2015 for Excellence in Research and Innovation held during the show chose 15 manufacturers who submitted 16 products out of 47 competitors with 49 entries as the winners, including Ching Hung Machinery & Electric Industrial Co., Ltd. (CHMER) and Hiwin Technologies Corp. 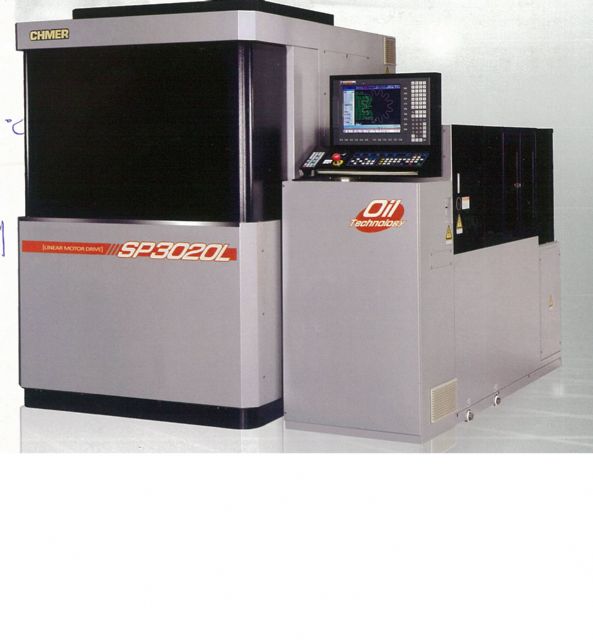 Linear-motion drive system is known for the advantage of minimizing mechanical wear and backlash usually seen in machines that use ball screws or other traditional means to drive linear guideway that carries worktable, hence upgrading processing precision.

The moveable gantry design allows SP3020L to be outfit with fixed worktable, thereby obviating the need for a movable worktable that usually needs ample space for movement that tend to compromise processing precision.

The machine's accurate measurement of  workpiece is attained by the online measurement system that uses contact probe to measure three points each on the workpiece's X, Y, and Z axis and the error compensation with B-axis machining.

This machine uses oil as coolant instead of water to minimize expansion-contraction on metal workpiece, which tends to be significant with water coolant.

In addition to the linear motion drive system, CHMER also has developed independently the controller and the rotary B-axis table.

The company targets promoting its equipment at aircraft builders who boast 90 percent self-content ratio, which is typically required by multinational manufacturers such as Boeing and Airbus.

Aircraft Sector Recovering
A CHMER sales rep at the show pointed out that the international aircraft industry has recovered from the 2008 global economic meltdown due to increased orders for new airplanes worldwide. The recovery has motivated, he said, aircraft builders to increase outsourcing mostly from Asia, where economic growth has been relatively stronger than elsewhere and manufacturing cost is comparatively lower than in Europe and America.

EDM, the sales rep said, has more merits than any other type of machine tools in processing aircraft components as turbine blades that are made of nickel-based alloy. They usually build very small vents on these components, which can be only completed by melting instead of drilling or boring or other processing methods. 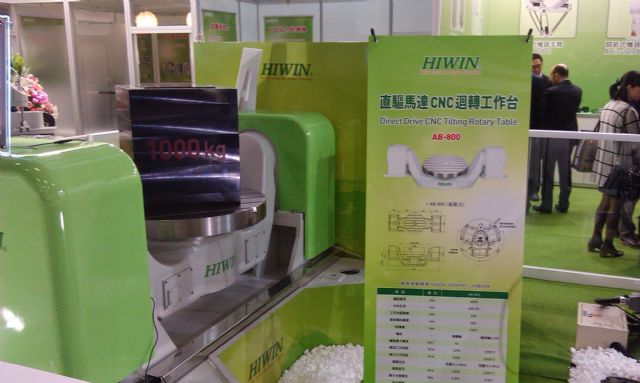 Compared with the worm-screw drive system, direct-drive servo motor can do much more precision work thanks to its gearless action. The AB-500 rotary table, for instance, boasts repeated accuracy of 0.036 arc-sec in rotating angle and 0.042 arc-sec in +/- 120-degree swing angle, with table rotating at 135 revolutions per minute (rpm).

The linear-motion drive surface grinding machine, JL-818ATD, was debuted at the show. According to its technician, linear-motion drive system is mostly integrated into high-end machines for excellent precision. "In short, you can say the system is the miniature version of maglev rail, generating no friction and therefore no vibration at all due to its contactless sliding action. So, the system achieves much higher precision on a machine than any other type of drive mechanism," he said. 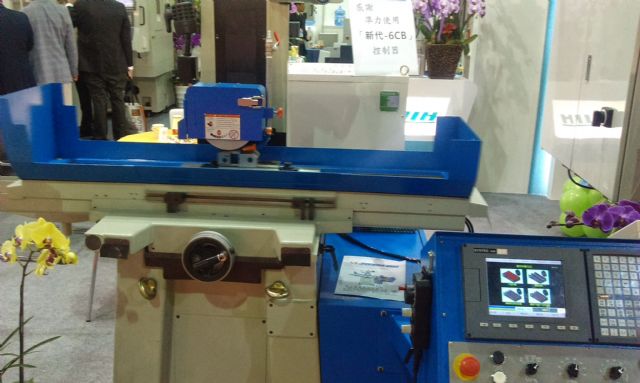 Mostly thanks to linear motor, JL-818ATD boasts plus-and-minus 0.001 millimeter for each cycle of automatic up-down feed.

The JL-2025X is the company's first milling machine after diversifying from making only  grinding machine. This is a high speed-spindle type for mold-making industry, boasting plus-and- minus 0.002 millimeter in repeated positioning accuracy.

Working with the Mechanical & Systems Research Laboratories (MSRL) of the government-backed Industrial Technology Research Institute (ITRI), the company is reportedly the only Taiwanese grinding-machine maker that builds products for wafer-polishing for semiconductor industry. 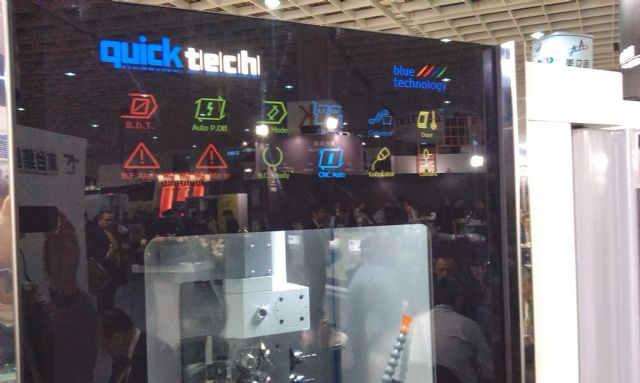 These icons are color coded into four categories of yellow, blue, green and red to indicate caution, normal, ready and alarm, respectively.

The door-marked indicators make it easy for operators to monitor several machines at once by easily seeing specific problems on the control monitor attached to each machine. The idea to display the operating status on the glass door came from head-up-display (HUD) technology.

According to managing director, Jacky Haung, technology should not be the only thing that generate value in machine tools. Making machines friendly to users is something that Taiwan's machine-tool makers can do besides technology to add value to their products.

The company's machines displayed at this show were mostly for heavy-duty cutting and cutting complex workpieces with multiple axes, dual cutting systems, an adjustable control panel, and a corded handheld control unit.

The unorthodox design allows users to remove completed workpieces from the worktable while the spindles are still cutting other workpieces, making the machine more efficient. The company plans to equip this machine with a robotic arm to replace a human operator to remove workpieces.

This machine comes with a tool magazine holding 72 cutters, enabling this machine to bore, mill, drill, thread, or groove workpieces, and an automatic tool changer with a two-second tool-change cycle.

According to the vice president, J.R. Ho, HM-34X is Taiwan's first horizontal CNC machining center with four spindles synchronously moving in the same direction. It is a challenging technology to achieve when you have to assure the four tools cutting on four separate workpieces are exactly the same in size and depth. She ascribed the company's success in developing this machine mostly to the management team, which is composed of machinery specialists with over 30 years of field experience. 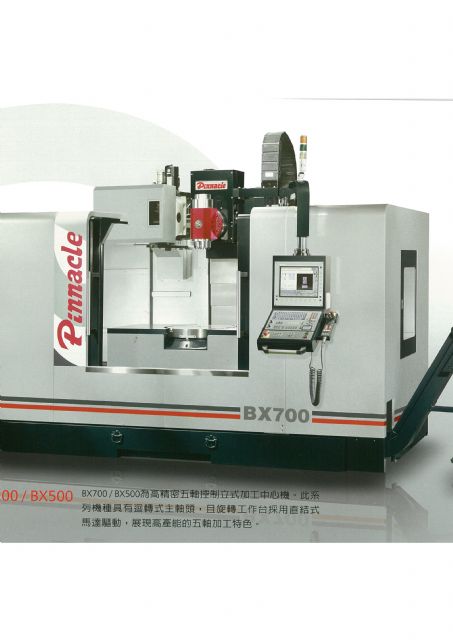 BX700T is also a synchronous-motion machine, with its +/-120 degree swing head, or B axis, driven by direct-drive motor and its rotary table, or C axis, turning at 1,200 revolutions per minute. The machine's repetitive error and positioning error for its X, Y and Z axes are plus and minus 0.003mm and plus and minus 0.005mm, respectively.

This machine's turning capability is achieved by using the Heidenhain TNC640 controller from Germany.

BX700T is suitable for making relatively large items with multi-asymmetric faces, such as turbine blades for aircraft and precision molds for electronic components. 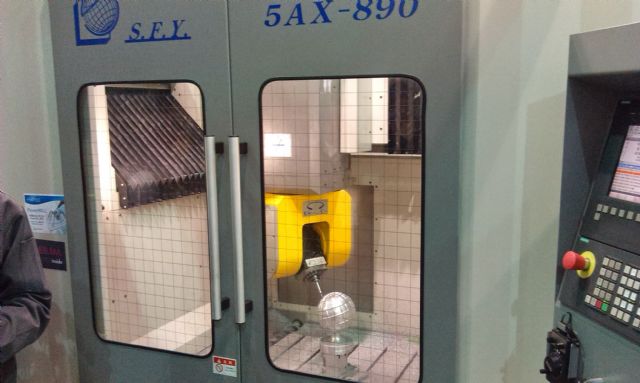 This machine is patented for its 24,000 rpm spindle that swings plus and minus 110 degrees in B axis and rotates plus and minus 225 degrees in C axis, being suitable for processing intricate products such as watch cases, jewelry, small and mid turbine blades, and tire molds for high-end cars.

Rigid column and one-piece base structure is responsible for this machine's 10 micron in repetitive positioning error.

According to general manager, Jimmy Huang, a veteran with 30 years of field experience in an 18-year-old firm, the company has many advantages over competitors including its in-house design and assembly, which enable the company to avoid underselling and dispute over product liability.

"Also our machines can be scaled up to workstation size in accordance with customer needs. And we can build automation for customers, and a notable feature is the automatic dial-up of pre-set phone numbers over the Internet when problems are identified but not yet solved," Huang said. 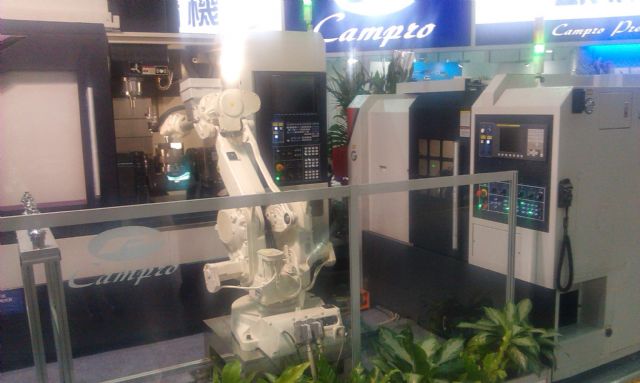 The combos for making car parts suggested the company's product emphasis has shifted towards auto and aircraft industries from electronics industry, which was previously the backbone application of its machines.

Its U500 five-axis machining center is a machine for aircraft and car industries. This machine is equipped with a built-in 12,000 rpm spindle, with A axis swing of plus 30 degrees to minus 120 degrees, and C axis rotating 360 degrees. Its tool traverses 36 meters, 36 meters and 30 meters in X, Y and Z axes, respectively.

He noted that integrating robotic arms with machine is a growing trend in many industries and typically due to rising labor cost, and stated, "Integration is not difficult work for us since we've provided customers turnkey planning for many years. Usually their priority concerns in automation revolve around time, workpiece load and unload, and repetitive positioning precision."