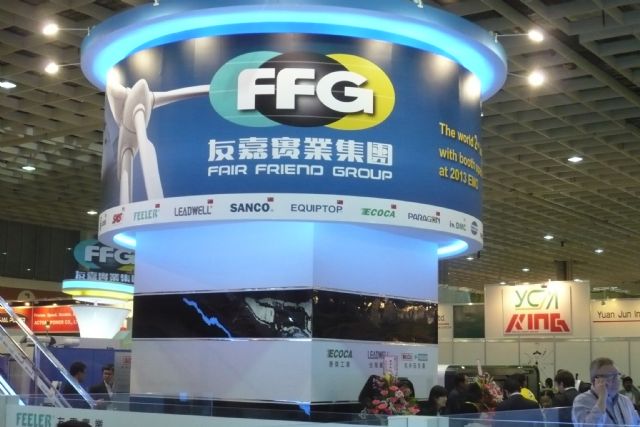 Fair Friend Ent. Group plans to go public in Taiwan by end of 2017.

Chairman Jimmy Chu of the Fair Friend Ent. Group, Taiwan's biggest machine-tool conglomerate by revenue, announced plans to go public in Taiwan around the end of 2017 by consolidating resources of all of its subsidiaries worldwide.

Chu says the group will set up a holding company after restructuring all its subsidiaries by the end of this year in preparation for the listing. The planned 2017 stock flotation on the Taiwan Stock Exchange will make the group the biggest automation-system provider both on Taiwan and China with projected revenue of NT$60-70 billion (US$1.93-2.25 billion) from machine-tool sales.

Chu estimates the group's machine-tool business to generate revenue up to NT$100 billion (US$3.22 billion) by 2020 and help increase the group's total revenue to NT$200 billion (US$6.44 billion) two years later after the listing.

Chu says the company invested around NT$1.5 billion (US$48.38 million) in the factory, which is designed to build 250 five-axis vertical and horizontal machining centers as well as lathing-milling combos a month and generate revenue up to NT$5 billion (US$161.29 million) a year.

Also in early March, Chu announced that the group will set aside US$200 million this year to acquire five to six machine-tool manufacturers in Germany, Italy and Japan to target generating additional NT$20 billion (US$645.16 million) in annual revenue.

Late last year, the group spent some US$20 million to take over 80 percent stake in DMC, one of the South Korea's top-six machine-tool makers, after acquiring 18 machine-tool builders overseas and setting up 16 joint ventures overseas in recent years.

The group has seen exponential growth by undertaking M&As to have earned deservedly the moniker “Acquisition Master of Taiwan's Machine Tool Industry” for Chu.