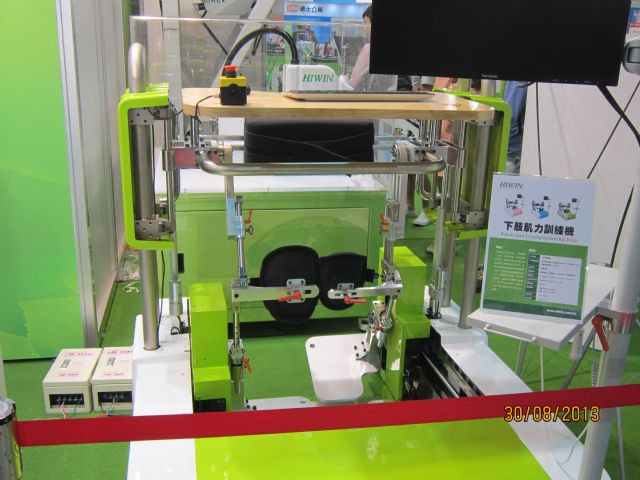 Hiwin Technologies Co., Ltd. Chairman Eric Chuo says the company will launch in June bath-assistant robots for home-care, healthcare applications and robotic arms to be integrated into a high-speed milling-grinding combo it has designed.

Chuo says the bath-assistant robots are designed to lessen labor input of caretakers who have to lift patients off beds and into bathtubs. Prototypes of such robots drew considerable response during an exhibition recently held in Shanghai.

Apparently tapping business opportunities so often reported and discussed in media and among experts that are incidental to graying societies and declining birth rates, Chuo expects the bath-assistant robots to help generate revenue as they join the lineup alongside the company's other home-care and healthcare robots soon.

The company will begin to ship robotic gait-training system in the second half of this year, with mainland China and Turkey being the first destinations, where it will also set up distribution channels for such robots. Mainland Chinese healthcare authorities will likely issue licenses to Hiwin by the end of this May.

Hiwin is also planning to develop arm-strengthening robots, most likely for physiotherapy, in cooperation with the China Medical University of Taiwan in an R&D laboratory that is to open soon.

The company's robotic arm for the high-speed milling-grinding combo is designed for automated production lines that turn out smartphones. Hiwin will license its mainland Chinese customers to build such milling-grinding machine for the robotic arm, but to make independently the arm and key components. Production will begin this June and shipment will begin next year.

Obviously giving credit where it's due, Chuo says his company is moving toward the goal of becoming a world-leading supplier of robots by integrating technologies from Russia, Germany, Israel and Lithuanian, also boasting that his company supplies the widest range of robots not only in Taiwan but also worldwide.

Chuo estimates corporate sales for the third quarter to outdo its sales for the second quarter mostly thanks to streaming orders for its industrial robots, also pointing out that labor shortage obliges manufacturing industries throughout the world to increase employment of smart automation system and robots.

There have been news reports in Taiwan of mainland Chinese operators of small factories having difficulty finding workers in coastal cities even with wage offers exceeding market averages. Rising affluence among migrant workers, coupled with more business opportunities due to increasing urbanization in second-tier cities, has resulted in shrinking labor pools in China's major industrial hubs.

Among the heavy users of the company's industrial robots, he says, are mainland China's optoelectronics and semiconductor industries, which are competing to install automation systems and robots to boost capacity.

To keep up with the brisk market for robots, Hiwin plans to add production capacity in July this year. In the first quarter, the company earned NT$1.97 per share in after-tax net income after deducting the loss of NT$133 million (US$4.29 million) from foreign exchange, posting gross margin of 39.2 percent, a gain of 2.2 of a percentage point from the previous quarter but down 0.6 of a percentage point year-on-year.