ABS Required on New PTWs Sold in Taiwan from 2019

The Taiwanese government's recent announcement to require all new motorcycles and scooters produced sold on the island from 2019 to be equipped with either an anti-lock brake system (ABS) or combined brake system (CBS) is expected to raise a tsunami in Taiwan's powered two-wheeler (PTW) industry, some industry experts forecast.

Many high-end motorcycle models now equipped with ABS, which will be required on all 125-plus cc scooters sold in Taiwan from 2009. (Photo from Bosch Motorcycle)

The Ministry of Transportation and Communications (MOTC) recently introduced rules requiring all new PTWs sold in Taiwan to be have ABS (on models with engine displacements over 125cc), or CBS (also called a linked braking system, or LBS, for under 124cc models). The new regulation is expected to reduce injuries from PTW accidents but will increase the production costs and retail prices of PTWs, potentially causing headwinds for new-PTW sales.

Some local PTW vendors have complained that the government's ABS/CBS rule follows similar regulations in some European nations. However, while ABS may be needed on PTWs in European riding environments, they may not be necessary in Taiwan. The new regulation will reduce demand for new PTWs as most buyers are in a relatively lower-income group. The vendors warned that the industry could the victim.

In Taiwan, the greatest majority of PTWs (and especially scooters) are used for short-distance commuting, the vendor said, so the new-PTW sales concentrate mainly in the under-150cc segment. There is already a speed limit for the under-150cc PTWs, they explained, and the ABS maybe a bit excessive, because in the greatest majority of cases, the vehicle is stopped before the ABS is activated.

A previous case quoted by local PTW vendors to describe the possible heavy impact on local PTW industry is the increasingly stringent emission standard. Taiwan put the fifth-stage emission standard into effect in 2009, requiring all PTWs sold on the island to be with the electronic fuel-injection (EFI) system. The compulsory standard ramped up the end prices of a general 125cc scooter from about NT$50,000 (US$1,667) to higher than NT$70,000 (US$2,333), scared away many new-PTW buyers. The result was: in 2009, sales of new PTWs in Taiwan suddenly plunged from about 800,000 units in 2008, to only about 500,000, and the impact was even heavier on locally produced models. Such phenomenon was called as the first tsunami on local PTW industry by vendors, most of whom suffered losses in 2009. 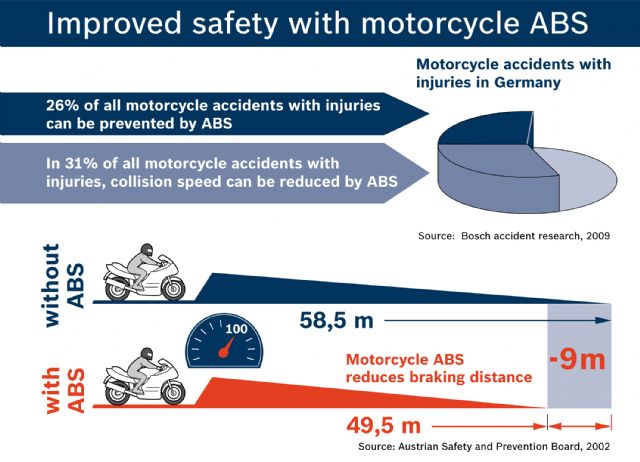 The Bosch motorcycle ABS enables motorcyclists to brake much more safely because it prevents the wheels from locking. As well as preventing falls, this also considerably reduces braking distance. (Photo from Bosch)

Industry sources point out that Bosch of Germany started to develop motorcycle ABS at the end of the 1980s, basing it on a system designed for passenger cars. The first systems finally rolled off the production line in 1994. They were installed in Suzuki police bikes in Japan. In the following years, volumes grew only slowly. This changed in 2009. First of all, interest in safety technology picked up and, second, Bosch launched its new flagship Generation 9. For the first time, this was a solution that was not derived from passenger-car technology, but instead developed specifically for use in motorcycles. The result was high performance at half the size and weight of the predecessor generation. Demand exceeded all expectations. As a result, production has risen by an annual average of more than 50% since 2009. In 2013 alone, roughly 350,000 systems have been manufactured. Now, every fourth motorcycle made in Europe has ABS on board. Bosch says that there is currently no sign that this dynamic growth will end.