Projector Shipments in Taiwan Down 11.4% in Q1: IDC Taiwan

Some 19,926 projectors were sold in Taiwan in the first quarter of 2015 (Q4, 2014: 21,898 units), down 11.4 percent year-on-year (YoY) and 9.0 percent quarter-on-quarter (QoQ), according to statistics released by IDC Taiwan, the local subsidiary of the global provider of market intelligence. 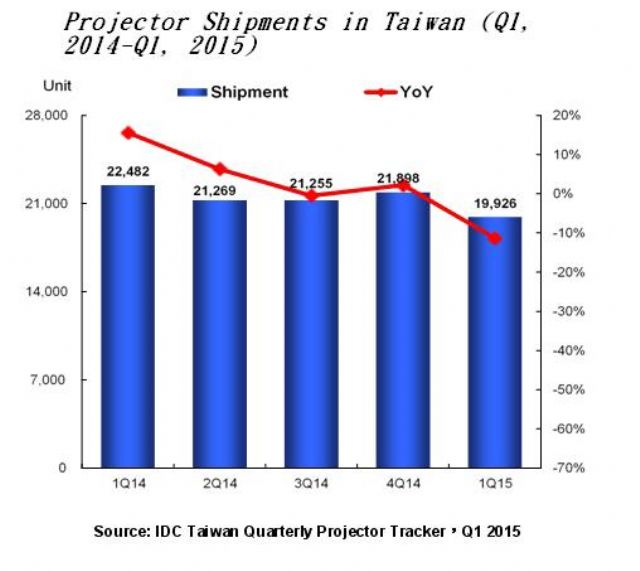 Ray Lin, associate market analyst, PC & Peripherals Group of IDC Taiwan, attributes the sales decline to seasonality factors and the delayed shipments to educational institutes due to the continual supply contracts. In addition, shipments of educational-use projectors during the period decreased due also to contract suppliers' lower inventory levels, which resulted from the suppliers being notified of the lower-than-expected budgets from educational institutes. The supplies have since not only reduced inventory but also shifted attention to the home and business segments.

Regarding resolution, extended graphics array (XGA: 1024 x 768 pixels) models took a market share of about 69 percent in the fourth quarter of 2014, but the share declined to 62 percent in the first quarter due to the reduced shipments of educational-use projectors.

Epson, Optoma, NEC, BenQ, Vivitek were the top-five brands in Taiwan's projector market in the first quarter, (Q4, 2014: Epson, NEC, Optoma, BenQ, Vivitek), commanding a combined share of 80.2 percent (comparing to 82.2 percent in the previous quarter), with the long-term leader Epson winning a 33.7 percent share (up from 29.5 percent in the previous quarter).

IDC Taiwan forecasts that Taiwan's 2015 projector market is expected to grow by 2.1 percent from the previous year, though the first-quarter shipments were as strong as before. The company said that many municipal governments' educational ministries have been earmarking new budgets for educational-use projectors in 2015, albeit with uncertain purchase volume. Such educational-projector replacement purchase projects are expected to begin implementation in the second or third quarter, to inject certain growth momentum in the projector market.

Regarding the home and business projector segments, IDC Taiwan says that vendors are investing more resources in marketing to likely achieve higher purchase willingness to lead to shipment growth.