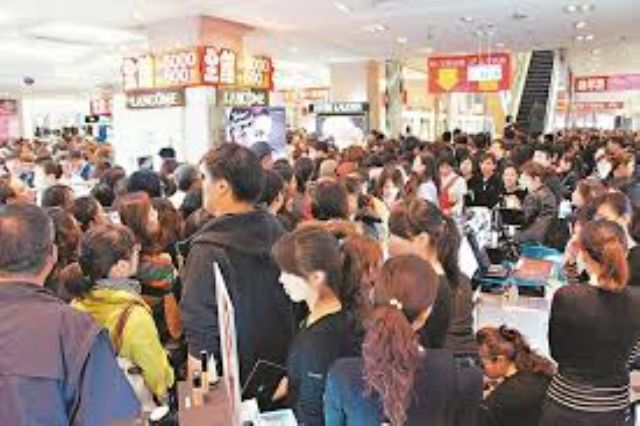 Sales boom during Dragon Boat Festival energize Taiwan’s retail and food service sectors to offset lackluster performance by local wholesalers. (photo courtesy of UDN.com)
Overall turnover achieved by Taiwan's mainstay business sectors, defined by the Taiwanese government as retail, wholesale and food services, totaled NT$1.196 trillion (US$37.96 billion) in June, up 2.5 percent over May but down 3.0 percent from last June, which was due to lackluster performance by local wholesalers, according to the latest report issued by the Ministry of Economic Affairs (MOEA).

Separately, the report shows turnover by the wholesale sector reaching NT$826.9 billion (US$26.25 billion) in the month, down 4.5 percent compared to last June. Of the total, that by local wholesalers of machinery and electronic devices, including PCs, handsets, power equipment and related peripherals, declined 7.8 percent year on year (YoY), mostly due to a widespread downturn in distribution of such products with Japan.

Also revenue achieved by wholesalers of building materials and chemicals dropped by 7.2 percent and 10.5 percent, respectively, due to similar reasons, including protracted inertia among buyers amid weak international steel prices; petrochemicals price having begun dropping when suppliers across Asia generally have ramped up output after production suspension for periodical maintenance, which, in turn, have made global buyers cautious, hesitant when restocking in anticipation to see if prices will drop deeper in the short term, the MOEA indicates.

For January-June, cumulative turnover by the wholesaler sector totaled NT$4.814 trillion (US$152.82 billion), representing a 2.9 percent drop over the same period of last year, as shown by the MOEA's report.

Meanwhile, the retail sector posted turnover of NT$334.3 billion (US$10.61 billion) in June, inching up 0.4 percent YoY, including NT$91.3 billion (US$2.89 billion) by local department stores, supermarkets, convenience stores and shopping mall operators, up 3.9 percent YoY, mostly due to relatively more robust consumption during summer sales and the Dragon Boat Festival, which traditionally calls for more spending on gifts, dining out and returning home for family gathering.

Retailers of food & beverage and cigarettes, ICT (information and communication technology)-based devices and white goods, pharmacy & cosmetic products, and auto & motor parts witnessed turnover up 3.9 percent, 3.0 percent, 2.9 percent, and 2.7 percent, respectively, YoY, whereas those of fuel and gas suffered a drastic drop of 21.2 percent in turnover of NT$21.1 billion (US$664.65 million), mainly due to relatively lower international crude oil prices, the MOEA notes.

On another front, the food service sector generated turnover of NT$35.6 billion (US$1.13 billion) as a whole in June, edging up 0.9 percent over a year ago, including NT$30 billion (US$952.38 million) by restaurant operators and NT$4 billion (US$126.98 million) by beverage vendors, respectively up 0.5 percent and 4.2 percent, to which the MOEA ascribes the following factors: surging demand for food services during the three-day Dragon Boat Festival weekend, which effectively offset the negative impact of some restaurant chain operators' brand restructuring in the month; and beverage vendors' increasing store numbers to boost sales amid hot weather.

In summary, the MOEA reports that the overall turnover by the abovementioned business sectors from January through June totaled NT$6.998 trillion (US$222.15 billion), shrinking by 1.6 percent from a year ago.

As to sales in July, the MOEA states that turnover by local businesses is expected to have soared significantly compared to that in June for a couple of reasons, including the wrap-up of 2015 Taipei Multimedia Show, held July 3-6 at TWTC Exhibition Hall 1 in Taipei; and the steady record-setting temperatures during the month, which are likely to have further driven consumer demand for food and beverage, household appliance as air-conditioners and fans, among others.

Contrasting the upbeat sales for local retailers and food service providers in July, the MOEA says that market prospects for wholesalers may remain grim, primarily because of lingering price drops of steel and crude oil worldwide, as well as the continuously sagging wholesale distribution business with Japanese customers.