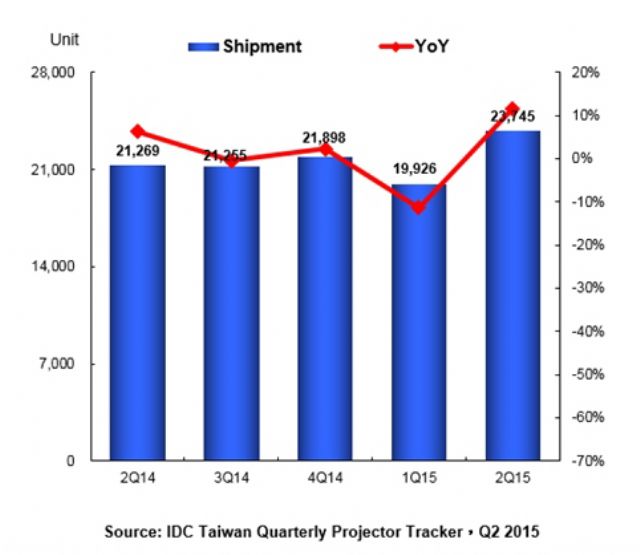 Epson, NEC, BenQ, Optoma and Vivitk were the top-five brands in Taiwan's projector market in the second quarter (The ranking in Q1, 2015 was Epson, Optoma, NEC, BenQ, Vivitek), commanding a combined share of 70.4 percent (compared to 80.2 percent in the previous quarter), with the long-term leader Epson winning a 21.0 percent share (down from 33.7 percent in the previous quarter).

IDC Taiwan forecasts Taiwan's projector market to likely see growth momentum in the third quarter, thanks mainly to the joint procurement by educational institutes in cities and counties island-wide.

In conjunction with the increasing demand for educational models, which often are associated with lower profit margins, the business and home segments are becoming the focus for projector vendors' strategic deployments. IDC Taiwan said that vendors are investing more resources in marketing to try to pique higher purchase willingness to lead to shipment growth.

On the other hand, IDC Taiwan said, the falling prices of 1080P projector models has been stimulating purchase willingness, and are expected to create another wave of demand in the market.