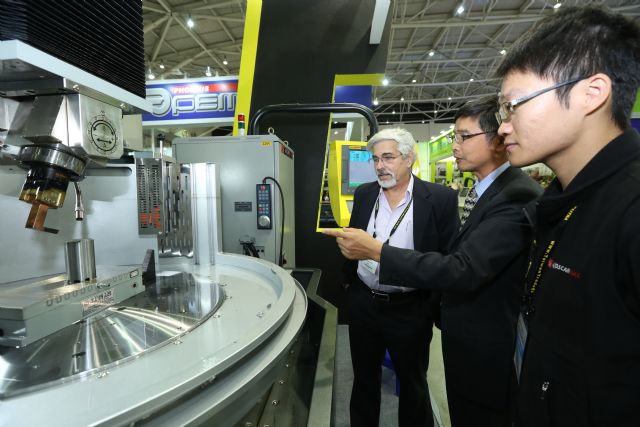 Weakened NT-dollar fattenes earnings at Taiwan's machine-tool makers in the third quarter. (Pictured are foreign buyers at a Taipei machine tool trade show.)
Thanks to the weaker NT-dollar, which devalued to about 33 to one US dollar occasionally this summer, most of Taiwan's listed machine-tool makers achieved fatter earnings in the third quarter than they did throughout the first half of this year, with Goodway Machine Corp. leading the way with earnings of NT$2.5 per share.

Industry executives point out that local machine-tool makers usually settle accounts for the third quarter on the final day of September based on the NT-dollar-to-greenback rate announced by the Bank of Taiwan. This year the rate was 32.8-to-1, enabling most of the manufacturers to swing from loss throughout the first half to profit in the third quarter ranging NT20-30 million (US$625,000-937,500) to NT$100-200 million (US$3.12-6.25 million) in foreign exchange gain.

Hiwin Technologies Corp., recognized as the world's No.1 maker of linear guide ways and ball screws used in precision machines including machine tools, saw its consolidated revenue for the third quarter slump 11.35% year on year, to NT$3.75 billion (US$117.46 million). However, its loss of NT$184 million (US$5.75 million) in exchange was recouped due to the weakened NT-dollar-to-greenback rate.

Industry executives estimate the company to make at least NT$3 per share in the third quarter based on the company's holding of at least US$30 million in cash, with some even believing the final result would surpass NT$3.61 per share it had made throughout the first half.

In the third quarter, Kao Fong Machinery Co., Ltd. is estimated to clear NT$0.6 per share thanks to the NT$24 million (US$750,000) it earned from foreign exchange transactions, the earnings from its core business operation and dividend from parent company Hota Industrial Mfg. Co., Ltd.

Kao Fong still has NT$450 million (US$14.06 million) of undelivered orders, which will keep its production lines humming until the end of this year.

AWEA Mechantronic Co., Ltd., a subsidiary of Goodway, made over NT$1 per share in the third quarter partly thanks to around NT$30 million (US$937,500) in gains from foreign exchange transactions, outstripping NT$0.82 it earned throughout the first half and boosting its EPS for the first three quarters to around NT$2.

Gaining over NT$100 million (US$3.12 million) in foreign exchange transactions, Goodway estimates its earnings at around NT$2.5 per share in the third quarter alone, exceeding its earnings of NT$2.11 for the first half and likely to swell the earnings for the first three quarters to NT$4.6 or so.

Tongtai Machine & Tool Co., Ltd. cleared over NT$60 million (US$1.87 million) in foreign exchange transactions in the third quarter, swelling its earnings for that quarter to around NT$0.4 per share. The projected third-quarter result outperforms its earnings of NT$0.23 throughout the first half and raises its total earnings in the first three quarters to over NT$0.6.

But the devaluation of the NT-dollar-to-greenback rate in the third quarter has been short-lived, with the Taiwan currency recently rebounding to around 32.5-to-1 greenback, triggering anxiety among the island's machine-tool makers about their shipments in the fourth quarter.