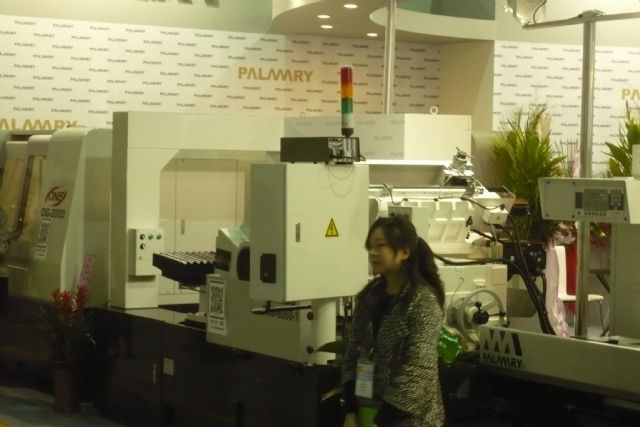 Worst post-2008 shipment recession hits Taiwan's machine tool industry. (picture shows an exhibitor at a trade fair in Taipei)
Noticing Taiwan's exports of machine tools having dropped 15 percent year on year (YoY) to US$2.91 billion in the Jan.-Nov. period, chairman B.X. Ke of the Taiwan Association of Machinery Industry (TAMI) projects the island's machine-tool exports to contract 16 percent YoY to US$3.15-3.2 billion by the end of 2015, the worst recession in such industry on the island since 2008.

He ascribes the plunge mostly to the weak market in mainland China and strong NT-dollar-to-greenback rate relative to weaker counterparts of South Korean won and Japanese yen.

He points out that the association had originally expected the climbing global demand for automobiles, aircrafts and 3C (communication equipment, computers and consumer electronics), coupled with fuel and electricity price cuts at home, to help drive up Taiwan's machine-tool and machinery exports by 10 percent by the end of 2015.

Currency Disadvantages
However, the steeply devalued won and yen have made Taiwan-made machines less competitive than those from South Korea and Japan. In addition, the decelerating economy in mainland China and Europe have dampened Taiwan's shipments of machinery including machine tools to the two world leading markets.

Observers of widely recognized television news sources as CNBC, CNN, BBC and Bloomberg offer a wide range of opinions regarding the cause of the said drop in exports, while the general trend seems towards the havoc caused by the plunging crude oil prices over the last year to hover recently around US$40 a barrel, that some predict have not bottomed and could even decline to as low as the US$20 range in 2016.

Other news sources say that China continues to undergo transition from a manufacturing-driven economy to one more reliant on services, which logically explains the weakening demand for machine tools.

Goal Achieved
Ke says that Taiwan's machinery industry has managed to attain the goal of shipping NT$1 trillion (US$30.30 billion) of products between 2008 to the present.

He also feels the market will remain uncertain for Taiwan's machine-tool industry in the first half of 2016 partly because Beijing will remove Taiwan-made lathes including computer numerical control (CNC) types on the first day of 2016 from its list of prioritized duty-exempt items in the Economic Cooperation Framework Agreement (ECFA) signed by Taiwan and the mainland, if such products fail to meet the requirement of using control systems made either in Taiwan or the mainland.

Although the association has suggested the mainland to reschedule the deadline to give Taiwanese makers more time to meet the said requirement, no response has been made by the mainland.

Bearish Market
Due to the bearish market, Hiwin Technologies Co., Ltd., recognized as the world's biggest maker of ball screws and linear guideways for machine tools and other precision machines, saw its revenue for November decline 34.5 percent YoY, to NT$982 million (US$29.75 million). However, its consolidated revenue for the Jan.-Nov. period gained 1.1 percent, to NT$13.92 billion (US$421.81 million).

Industry executives say the November result represents an all-time low since March of 2014 in the company's history. They say while the mainland China market is sagging, the relatively strong NT-dollar-to-greenback rate has further eroded the company's shipments to mainland China, Turkey and the Middle East.

The executives predict the company's shipments of servo-driven A-axis and C-axis rotary tables and high-speed milling-grinding combos to fail to meet expectations in the fourth quarter.

Upbeat Outlook
However, they are upbeat about the outlook of the company's robot shipments, expecting the products to make improved gross margin in 2016 due to upgraded in-house components for the robots. The company recently said although its robot shipments have ramped up, the gross margin will not rise considerably in the initial stage.

Hiwin Chairman Eric Chou says the company has won an order from a local semiconductor-equipment maker for 200 wafer-retrieving robots, which will become the company's main revenue earner in 2016 thanks to the company's plan to ship over 10,000 systems.

In addition, the company's medical robot projects will make considerable progress in 2016, with its gait-training robots planned for market launch in early 2016 and its bath-assisting robots likely to enter the Japanese market in the second half of the same year.

The company's robots for various industries, including healthcare, biotech, electronics and manufacturing, have passed verifications.

The sagging machine-tool market in the mainland has fueled reports that many of Taiwan's big suppliers have been defaulted on billions of NT-dollar by their Chinese customers. However, the suppliers named have denied such reports to say they are rumors.

TAMI's president, J.C. Wang, says he has yet to hear of any local makers talk about defaults in the mainland and sternly commented that no one should fabricate stories, but conceded that the market is truly flagging.