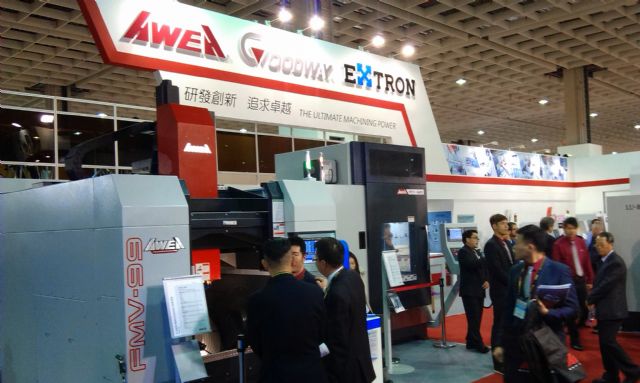 In early 2015, AWEA projected its consolidated revenue to reach NT$4 billion (US$121.21 million) by the end of this year. But now industry executives feel the company at most can generate about NT$3.8 billion (US$115.15 million) based on the NT$3.47 billion (US$105.24 million) the company had already reported for the Jan.-Nov. period.

They put the company's 2015 earnings at up to NT$3-per-share since its earnings for the first three quarters had already reached NT$2.57.

AWEA still has NT$1 billion (US$30.30 million) of undelivered orders, which will keep the company's production lines running throughout March, 2016.

Goodway Chairman Edward Yang showed foresight by accurately predicting the company's consolidated revenue for 2015 would decline from 2014's level after having seen weaker-than-expected shipments in the three and fourth quarters. Industry executives put the company's 2015 revenue at NT$7-7.2 billion (US$212.12-218.18 million), with estimated earnings of NT$6 per share.

The company, mostly dependent on sales of lathe for revenue, still has NT$400 million (US$12.12 million) of booked orders, to keep its production lines busy throughout February of 2016.

Goodway and its AWEA subsidiary both feel the global machine-tool market is unlikely to rally in the first half of 2016. Even if the market climbs in the second half, the two companies will mostly count on the American market for to-order machines to continue driving growth since the rest of the world will likely remain weak.

Although Kao Fong President and Chief Executive Officer David Shen have vowed to boost corporate revenue for 2015 to NT$2.4 billion (US$72.72 million), industry executives feel the company will generate around NT$2.05 billion (US$62.12 million) at most, with estimated earnings of NT$1.5 per share, based on the company's disappointing orders from South Korea, North America, as well as Eastern, Southern and Western Europe, where the company has signed new dealerships in 2015.

They ascribe the predicted failure to meet target mostly to the strong NT-dollar-to-greenback rate relative to weaker counterparts of South Korean won and Japanese yen, which make the South Korean and Japanese shipments more competitive than Taiwan's.

Tongtai still has around NT$2 billion (US$60.60 million) of undelivered orders, which will keep the company's production lines inundated throughout March of 2016.