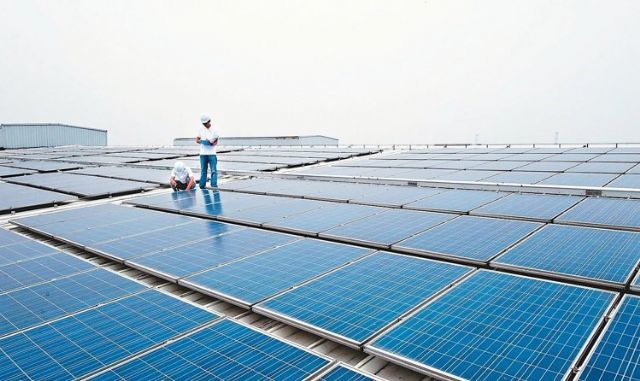 Taiwan's PV-equipment makers achieve stellar Dec. revenue on robust demand.
Taiwan's photovoltaic-product makers showed stellar revenue result in December 2015, with some reporting all-time highs and some of the others swinging to profitability from loss.

Although Giga Solar Materials Corp., recognized as a leading provider in Taiwan of conductive paste applied in silicon solar cells, had to cut its average selling price on account of the steep fall of silver prices on the global market, the company still saw its revenue in that month rise 4.9 percent from a month earlier to hit a nine-month high of NT$1.72 billion (US$52.21 million). The company uses silver and aluminum as the raw materials to make its paste mixture.

The December result also represented a 62.7 percent surge from the same month of 2014 to help swell the company's revenue for the final quarter by 10.3 percent sequentially to NT$4.50 billion (US$136.60 million).

Giga Solar executives ascribe the revenue growth mostly to strong demand from customers, namely solar-cell makers, whose orders, they say, will keep their production lines busy at least throughout the end of the first quarter. Also the company's solar-powered factories will enhance the first-quarter revenue by selling surplus electricity to the grid.

In December, Green Energy Technology Co., Ltd. (GET) of Taiwan, a maker of polycrystalline silicon wafers for making solar panels, had revenue of NT$1.53 billion (US$46.39 million), increasing 9.4 percent from a month earlier and 16.18 percent year on year (YoY).

The company's executives attribute the impressive December growth mostly to the fall of polycrystalline-silicon price and the hike in the wafer's average selling price, which helped swing the company's monthly operation to profitability from loss over the past four years

Gintech Energy Corp., a maker of solar cells and modules in Taiwan, saw its revenue for December rise 3.7 percent year on year and 18.1 percent month on month to hit a 19-month high of NT$1.63 billion (US$49.63 million). Company executives ascribe the growth mostly to rising average selling prices of its products and increased output at its factories in Thailand.

Industry executives project the company's revenue for 2016 to reach the NT$20 billion (US$606.06 million) milestone based on the company's rising output at its Thai factories.

In 2015, Gintech turned a profit in the third quarter, reducing its total net loss for the first three quarters to NT$1.18 per share. Industry executives estimate the company's earnings to increase from the third quarter to the final quarter, with the company to likely post a profit throughout 2016.

Neo Solar Power Corp., another maker of solar cells and modules based in Taiwan, had revenue of NT$2.63 billion (US$79.96 million) in December, 2015, increasing 34.5 percent from the previous month to top all the other monthly revenue in 2015, albeit down 8.2 percent YoY.