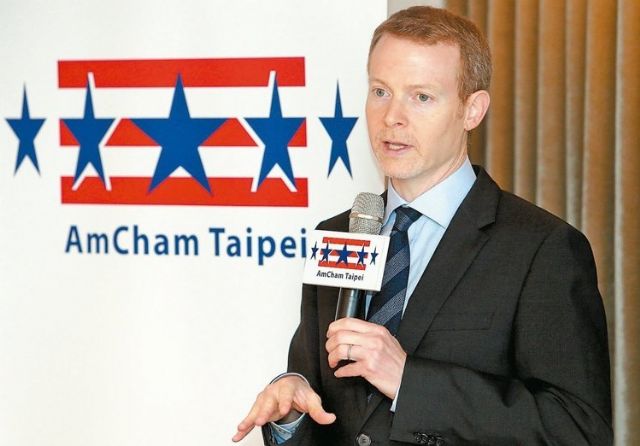 AmCham Taipei Chairman Dan Silver.
Only three days after the presidential election in Taiwan that voted into office Tsai Ing-wen of the Democratic Progressive Party, the first female for the top job in Taiwan, the business climate survey released on Jan. 19 by the American Chamber of Commerce in Taipei (AmCham Taipei) shows only 47 percent of the polled 406 voting members of the Taipei-headquartered chamber feel optimistic toward the five-year outlook for their businesses in Taiwan, plunging from 60 percent registered in 2015 to set a fresh all-time low since 2011.

Chamber Chairman Dan Silver points to many factors that may have contributed to the sharp decline, including the sluggish state of the world and the Taiwan economy, and uncertainties over whether Taiwan will be able to gain entry into emerging regional trade pacts such as the Trans-Pacific Partnership (TPP) to avoid being marginalized. In not so many words, Silver likely implies that the spate of stock market turmoil, starting with the crash in China some five months ago, coupled with steadily plunging crude oil prices that have dipped below US$30 a barrel as of Jan. 20, 2016, reportedly overvalued stocks on the NY exchange that have mostly rallied since the 2008 global meltdown, and the economic slowdown in China that has undermined Taiwan's exports over the first half of 2015 as culprits.

In addition, he emphasized that “inadequate or outdated laws” to be the overriding factor cited by the respondents to bear the most negative impact on their business operations in Taiwan, followed by “inconsistent regulatory interpretations.”

Nevertheless, Silver says that the current government continues to seek to bring Taiwan's regulatory processes up to date and more in line with standard, international practices, with an eye to prepare the island's prospective bid for TTP membership and more fundamentally to enhance Taiwan's competitiveness in the global marketplace.

Among the other factors cited within the top-10 include “insufficient notice before changes to regulations or laws are introduced,” “inconsistent application of rule of law,” “differences between local and internationally-accepted standards,” and “lack of transparency.”

The survey shows that 67 percent of the respondents were profitable in 2015, which is in line with the trends of previous survey results. Silver points out that the chamber's members regard Taiwan as a good place to do business because of attributes as its industrious and well-educated workforce and its safe and hospitable environment.

However, some 54 percent of the respondents expected either “modest” or “substantial” growth in profit and revenue in the coming year, down from 61 percent who had made that forecast in 2015.

In contrast, the survey also shows 24 percent of the respondents feeling pessimistic about the business outlook for their operations in Taiwan, increasing eight percentage points from 2015 to reach a six-year high.

Of the respondents, 44 percent said their companies will likely increase “slightly” or “substantially” their investments in Taiwan over the next 12 months.

Of the AmCham members' companies who responded to the survey, 51 percent reported having increased staff during 2015, compared with 55 percent in 2014. In addition, 41 percent of the respondents said they plan to increase the headcount during 2016, with 46 percent expecting to maintain their 2015 levels.

The survey also indicates a substantial 87 percent of the respondents in support of Taiwan's pursuit of membership in TPP.

Apparently reflecting the sagging consumption in Taiwan that is of chief concern, as the survey indicates, Silver says that the chamber encourages the Taiwan government to implement programs and policies to boost consumption, including creating more jobs, investing in the development of domestic infrastructure and human capital.

Addressing AmCham Taipei's concerns about Taiwan's economic outlook, officials of the Department of Economic Development of the National Development Council (NDC) expect the economic outlook for Taiwan in 2016 to be more buoyant than the sentiment suggested in the survey based on their projection that the island's economy will likely bottom out in the first quarter of 2016 and enter expansion thereafter shortly.

The officials also say the survey shows downbeat mood among the chamber's members toward Taiwan's economy mainly because it was conducted between October and December 2015, during which many of the island's economic data looked bearish.