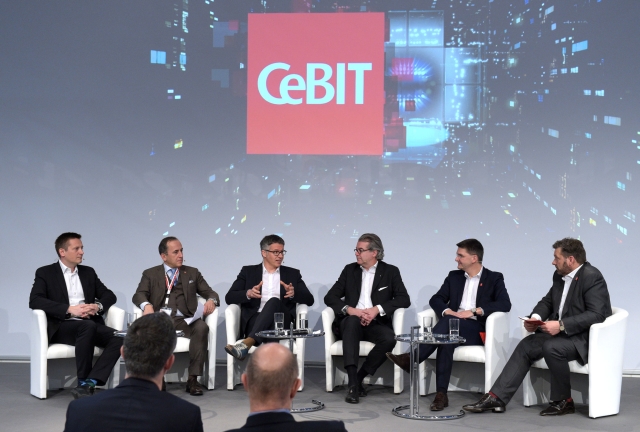 The media wrap-up event held for CeBIT 2016 closed on March 24 in Hannover, Germany.
CeBIT 2016 came to a successful close, earning praise from exhibitors and visitors as well as the organizers and their partners. “CeBIT 2016 put digitalization at the top of the business, political and social agenda,” said Oliver Frese, member of the managing board at Deutsche Messe AG, on Friday in Hannover. “CeBIT underscored its role as the world's leading platform for the digitalization of the economy and society. In its own unique way, CeBIT made digitalization tangible.”

Visitors at the five-day event experienced a new CeBIT. “We worked intensively on CeBIT with our international exhibitors and partners, and that paid off over five days,” said Frese. “The numerous new formats impressed the visitors. Every day, one million business talks took place at the exhibition center. CeBIT is the tech industry's most important highlight of the year, it is impulse-giver for the branch. It is used more and more as a platform for networking and discussion.”

With the lead theme “d!conomy: join – create – succeed”, CeBIT focused on the people behind the decisions powering the digital transformation. As a result, CeBIT registered a notable increase in attendance by professionals from sales, marketing, finance, banking, and insurance. “In many cases, these professionals were accompanied by their companies' IT specialists. “Digitalization is causing a redistribution of roles within companies. This in turn changes the visitor structure of CeBIT,” explained Frese. “CeBIT is pure motivation for employees and customers to take advantage of the opportunities created by digitalization.”

For the first time ever, CeBIT kicked off on Monday with a European Union conference on the digital agenda. In his keynote address, EU Commissioner Günther H. Oettinger called for a digital single market and Europe-wide legislation, pointing out that national borders are of limited relevance in the context of digitalization. Oettinger also made this point in the address he delivered at the new Welcome Night at the Hannover Exhibition Center, which was attended by over 2,000 guests from business and politics. At the start of CeBIT, German Federal Minister of Economic Affairs Sigmar Gabriel announced a billion-euro, ten-point plan adopted by Germany's federal government developed to prevent Germany from falling behind in the digital sweepstakes. One focus of this “Digital Strategy 2025” would be further developing Germany's fiber optic network, he said. Gabriel explained that these efforts addressed the question of, “How we as Europeans can remain competitive in a data-driven economy”.

On Tuesday, German Federal Chancellor Angela Merkel was at CeBIT for her traditional tour of the show, gaining a first-hand impression of the solutions and opportunities opened up by digitalization. She emphasized the need for faster progress. “Time is of the essence”, she urged, adding that linking today's offerings with the Internet needed to be accelerated to take advantage of the huge potential for efficiency gains.

Startups at SCALE11 demonstrated how the Internet of Things can create new business models. “More than 400 startups at CeBIT provided a creative boost. They demonstrated how technological innovations go hand in hand with innovations in business models,” commented Frese. “At the stages and in the boxing ring, these young teams showed a passion for their ideas. With SCALE11, CeBIT provided an international exchange for business models and creative ideas. The SCALE11 concept is fully realized.” Every third CeBIT visitor stopped by SCALE11 in 2016. “This shows the huge interest in new, creative business models,” said Frese. “In the coming year we will further develop this area.”

New, creative business models were also on the agenda at the CeBIT Global Conferences in Hall 8. More than 200 speakers took the lectern during the five days of CeBIT, talking strategies and visions with their audiences. Keynote speakers and panelists included the CEO and President of Konica Minolta, Shoei Yamana, President of the Enterprise Business Group of Huawei Lida Yan, Ericsson CEO and President Hans Vestberg, founder of the Waze navigation startup Uri Levine, and leading theologian Wolfgang Huber. On Friday, roughly a thousand bloggers were expected to attend the “Rock the Blog” event. The more than 2,000 discussions, presentations and talks in the exhibit halls also showed visitors the way to the digital future. “Digital transformation needs room for debate – CeBIT 2016 delivered this. CeBIT has thus become the most important platform for the chances and risks of digitalization,” said Frese.

Exhibitors also reported that the visitors coming to see them at their stands showed increased interest in the latest product information. Many of the talks held with decision-makers from a wide range of industries and business segments focused on the opportunities created by digitalization in their particular lines of business. Key topics included the Internet of Things, the Cloud, analytics, security and resource planning for companies going through the process of digital transformation.

There was also wide interest in the future of the human-machine interface. Many visitors were looking to find out more about humanoid robots for use in education and service areas. A controversial topic of discussion, both in the trade fair complex and on social networks, was the issue of “bio-hacking”. CeBIT visitors were also able to have a tiny RFID-NFC chip implanted in their hand.

With around 3,300 companies from 70 countries, CeBIT 2016 was solidly on a par with previous years. The same, steady trend was evident in terms of attendance. As was the case last year, one in every four trade visitors came from abroad, although the number of stands at which attendees engaged in business talks continued to rise. The statistics showed that on average, each CeBIT attendee stopped to see 32 companies, as compared with 26 last year. International visitors came with higher capital expenditure budgets for digital applications, with an average of almost €220,000 per capita.

On behalf of CeBIT exhibitors, Vodafone Global CEO and CeBIT exhibitor committee chairperson Jan Geldmacher summarized the week's activities as follows: “Digital solutions are a vital necessity for economic success in the 21st century. That means Germany needs a first-class infrastructure. CeBIT 2016 has clearly spotlighted this, impressively confirming that ‘made in Germany' is still a token of high quality which keeps its promise. In fact, the foundations for many of tomorrow's digital innovations are being laid here and now – by German researchers, who are developing networks in the Gigabit data speed range, as in the 5G mobile telephony standard, for Germany's Gigabit society and for Industry 4.0.”