One of the most important activities in Taiwan's transportation vehicle industry every year, the 4-in-1 show for auto parts, automotive electronics, electric vehicles (EVs) and motorcycles, has just opened in Taipei, northern Taiwan.

TAITRA points out that the 4-in-1 mega show is expected to attract 7,000 buyers from 130 countries. While a large number of foreign buyers have taken part in the show to source quality products, the organizer reports, a total of 15 heavyweight buyers, who are remarked for generating turnover of over US$100 million annually, have also been present there, including Worldpac Inc. and US Auto Parts Network of the U.S., Mekra Lang GMBH & Co. KG of Germany, Pol-Mot Auto S.A. of Poland, Sunstar Singapore Pte. Ltd., etc. 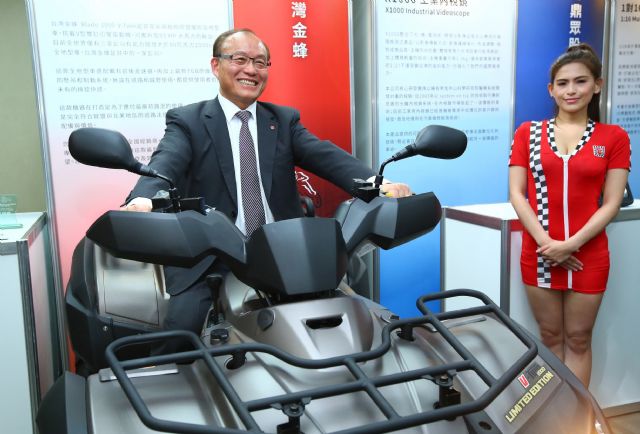 Those winners are selected based upon five criteria: innovation, contribution to industry, market value, energy efficiency and aesthetics, and the award-winning products are being displayed under the themes of artificial intelligence, renewable energy and artistry in Nangang Exhibition Hall's Light Gallery during the show.

Peter Huang, president and CEO of TAITRA, says that the Innovation Awards has entered its 10th anniversary, and every year the award-winning items outline the market and technology development trend. Among the winning products, he adds, many are globally-patented pioneers, such as an advanced upgrade automotive headlight that is noted for allowing remote control through a smartphone loaded with a specialized app developed by Taiwanese auto-lamp maker Depo Auto Parts Ind. Co. Ltd.; a palm-top multifunction power bank that can work as a emergency car-boosting power; an advanced front blind-zone detection system; and a 1,000cc ATV, etc.