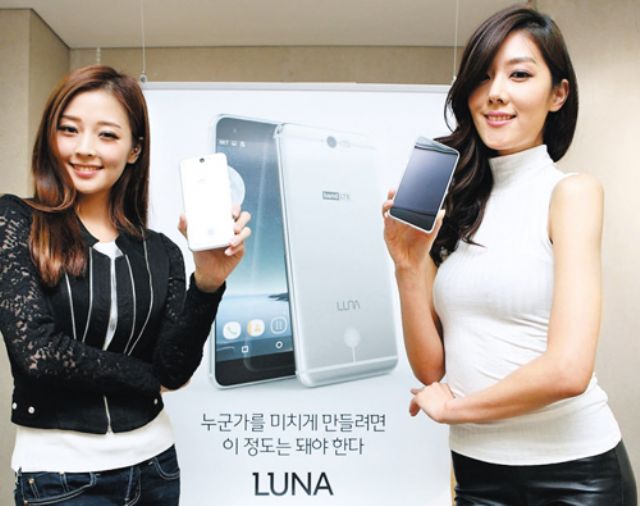 Luna developed jointly by Foxconn and SK Telecom has been promoted outside of Korea this year after it was launched and proved popular in the country (photo courtesy of SK Telecom).

The Taiwan-headquartered Foxconn, an affiliate of Hon Hai Group, world's largest EMS (electronic manufacturing service) provider by size, has moved to deepen its cooperation with Korean partners to promote the smartphone model Luna outside of Korea after the product proved sought-after by local consumers for its competitive features in the northeast Asian country.

Developed jointly by Foxconn and SK Telecom of Korea, Luna has a 5.5-inch touchscreen and Qualcomm's Snapdragon 801 processor, and is retailed for only KRW400,000 (about US$346) per unit, approximately 40 percent of the unit price of iPhone 6 Plus. The appealing price-to-performance ratio enables the smartphone model to have quickly gained solid ground in the Korean market.

Luna was debuted last September by TG & Company, an affiliate of Sambo Computer, as the Korean firm's first smartphone, with the first 30,000 units in stock sold out in only 10 days. Later, it commanded even a 28.4 percent share of the middle-end segment of Korea's smartphone market as the second-bestselling model, according to statistics compiled by local market research firms.

Witnessing Luna's great popularity, Foxconn and its Korean partners have begun promoting it overseas recently, including Indonesia, where the smartphone model, priced about US$380 per unit, has pivoted heavy attention from local consumers and received raving reviews from news agencies. Chairman Terry Gou of Hon Hai Group revealed earlier that sales of Luna in the Southeast Asian market exceeded 36,000 units in three weeks after it was launched.

With Luna to hit more overseas markets beginning this year, some market observers opine that increasingly deepened cooperation with Korean partners on promoting the smartphone model is expected to enable Hon Hai Group to chip away at Samsung's dominance in the Southeast Asia market.

Worth mentioning is that Hon Hai has recently been reinforcing its presence in the smartphone sector by various means, including signing a contract with Russian authorities to kick off R&D for new materials for smartphone production in Skolkovo, proposing an investment in setting up a smartphone maintenance and repair center in Czech, and assisting Nokia to reorganize the latter's smartphone factory in India.