TIMTOS 2017 to attract over 1020 international exhibitors

TIMTOS 2017, which is scheduled to be held in Taipei from March 7-12, 2017, will attract participants from around 18 countries.

In MT duo, you can see the latest products integrating Information Technology, Internet of Things and smart manufacturing. Simply to say, TIMTIS is an extensive exhibition of MT duo. Those being focused in MTduo will be brought into full play in TIMTOS.

Ever since the registration commenced in April, 950 exhibitors have applied for over 9,000 booths, breaking previous participant records, Huang said.

The international exhibition is expected to attract more than 55,000 visitors including 7,500 foreign buyers.

To comply with the global trend of science and technology, he said the topic of the forthcoming exhibition will be “Industry 4.0 Plus and Smart Manufacturing.”

The expo will integrate the advantage of Taiwan ICT technology with IoT and big data to provide the Industry 4.0 whole-plant output technology of “Smart Manufacturing” and “Smart Factory”. 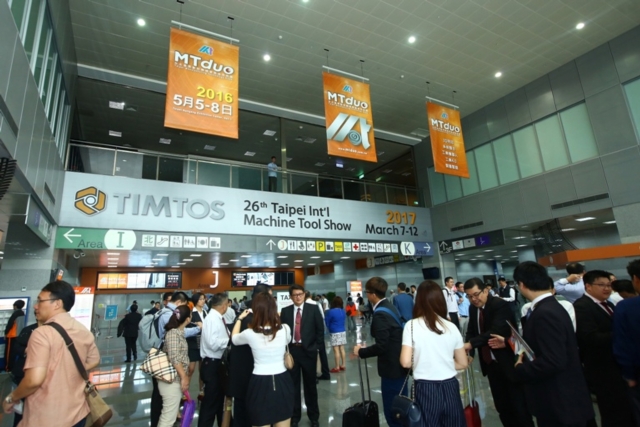 Further, Swiss Commercial Office has applied while German Economic Office will also organize the German National Pavilion with the global companies like BLUM and SCHUNK

Addressing media persons, David Chuang, Chairman of Machine Tool Committee, Taiwan Association of Machinery Industry (TAMI), said the machine tool production in 2015 stood at $ 81.2 billion, down from $ 95 billion in 2013 while the consumption touched $ 75.3 billion. The export reached $630 million from January to March 2016, down 20.7 percent as compared to the same period a year ago.

Looking at the current trend, Chuang said, “We think Taiwan is entering a bouncing stage at the bottom of the downturn and expect a sign of recovery in the second half year with more purchasing orders received.”

Taiwan is an island country and the export of machinery products stands at around 70 percent of the whole industry. Professor Rong Ching Lin from NTUST, who is also a judge in the “Research and Develop Innovative Products” competition held in the previous two TIMTOS, acknowledged that Taiwan machine tool industry had already headed towardd “Industry 4.0.”

In the future, he said, “We can take steps closer to the ‘Visualized” cloud service application, “Linkable” system integration and “Intelligent” aspects.