HTC Corp., a Taiwanese consumer electronics company manufacturing devices such as mobile phones and tablets, confirmed to sell its mobile business division to Google, an American multinational technology company that specializes in Internet-related services and products, for US$1.1 billion (NT$33 billion) and a better chance to rival against Apple Inc.

Cher Wang, a co-founder and chairperson of HTC, noted that, aiming to build a robust ground in the smartphone market, the firm established “Powered by HTC” team with a plan to develop Pixel (smartphone) jointly with Google; and the main purpose of the said deal is to transfer the team to Google.

In addition, HTC has licensed Google for the use of most of patents it holds, but the licensing is not exclusive.

Wang stressed, HTC still plans to launch new smartphone products, including HTC U11 Plus and a flagship model for 2018, while continuing its VR (Virtual Reality) Vive platform development.

Chang Chia Lin, chief financial officer and spokesman of HTC, said that backed by HTC's over 2,000 R&D engineers, the firm will further focus on the development of own-branded smartphones and IoT (Internet of Things) products.

Nowadays, Apple enjoys some 90% share of the global smartphone market, and actively innovates to provide better user experience of its iPhones through integrating software, hardware and services.

On another front, due to its open nature, Android sees a large community of mobile Internet device developers work out various UI based on the operating system.

As AR (augmented reality), VR and AI (artificial intelligence) have become the next big things, Google, a spiritual leader in Android system, needs to build a stronger team with better integration of high-end smartphone systems so as to compete against Apple.

Rick Osterloh, senior vise-president of Google's hardware division, pointed out that about a year ago, Google already came up with an idea to develop hardware products on the basis of the firm's intelligent technology. To that end, the company will work on the integration of consumer hardware products and related programs initially, and then move to set up an independent hardware division with a goal to provide its customers the best user experience. 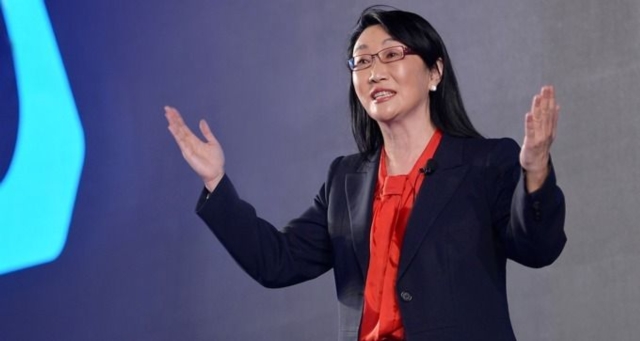 Cher Wang, a co-founder and chairperson of HTC (photo provided by UDN.com).