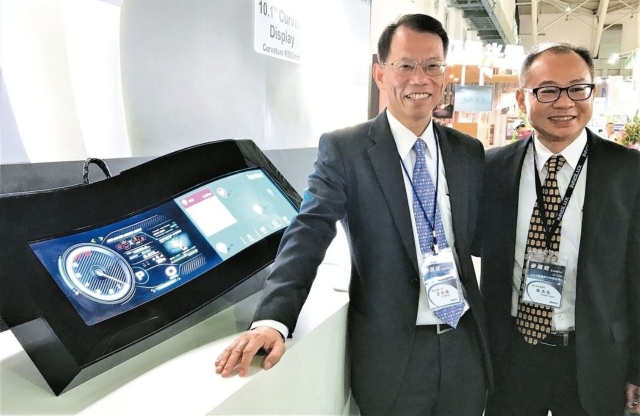 Paul SL Peng, AUO's chairman & chief executive officer, noted that the market for auto display is entering a rapid growth phase. In addition to the growth in number, the size of today's display is getting bigger as well. The usual size of an automotive cluster used to be 3 or 4 inches, and Center Informative Display (CID) was as large as 7 to 8 inches; but nowadays display panel can come in as large as 25 inches. Peng said.

Peng further added that a traditional rearview mirror only covers a viewing angle of no more than 60 degrees; nowadays, thanks to the use of lens of digital cameras and displays, the viewing angle can reach more than 130 degrees, allowing drivers to drive with broader views and increased safety.

On another front, InnoLux has been actively transforming itself from a display manufacturer to a display module provider. Yang,Chu Hsiang, general manager of InnoLux, stressed that by 2018, output volume of InnoLux's auto display modules will total 1 million units.

Meanwhile, Chung, Chao Qi, vise general manager of CPT, said the company has been rewarded by its efforts on the research and development of auto panel application. Compared to 13 million units in 2016, CPT expects its annual output to 14 million to 15 million units in 2017. In 2018, the firm will continue to focus on the auto pre-market with an aim to sell 16 million panels.

Chung stressed that CPT, with its customers mostly from Japan, enjoys a 16%-17% share of the global auto display market, and has successfully ventured into the Chinese market. In China, every one out of three sedans is built with CPT's panel display.
With auto displays and industrial displays contributing 20% to CPT's total revenue last year, Chung looks to increase the ratio to 60%-70% within 5 years.