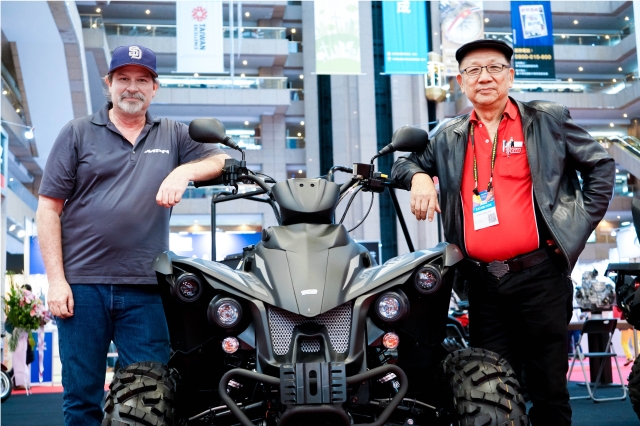 One of the concurrent events held during the 13th Taiwan International Motorcycle Industry Show (Motorcycle Taiwan 2018), the seminar titled “Turning New U.S. Powersports Business Opportunities” was rounded off with overwhelming acclaim from the audience as a resounding success, mostly thanks to the excellent quality of the lecturers invited, all of whom are seasoned veterans and experts at high profiles in the line.

Among the lecturers was Robin Hartfiel, the editor-at-large and contributing writer in Motorcycle & Powersports News, a professional motorcycle and powersports industry magazine which has delivered business intelligence to 15,000 dealers and professionals in the sector in the U.S.

In fact, Hartfiel is responsible for not just reporting on the powersports market for MPN but representing the magazine in the marketplace at industry events and trade fairs and assisting with the implementation of an industry advisory board. Based on the rich experience and varied background as described on MPN's website, his lecture received accolades from the listeners in the seminar event, for casting light on the current development of the U.S.'s two-wheeler market while being informational and inspirational.

To help Taiwanese makers and suppliers in the powersports vehicle industry gain a deeper understanding of the U.S.'s two-wheeler market via the expert's perspectives, CENS summed up the ideas conveyed from his lecture on the thriving but competitive marketplace, as well as the advice to Taiwanese suppliers who look to better explore the market, as the following.

On the status quo of the two-wheeler market in North America, Hartfiel commented that annual sales has remained at the level of around 500,000 units since 2008; or totaled about 1.2 million units in each of the past few years when including those of ATVs (all-terrain vehicles) and UTVs (utility vehicles). Also notable is that, the editor-at-large continued, respective sales of the said vehicle categories tend to vary in different areas and depending on climates. For instance, ATVs and UTVs would be accepted more than motorcycles by residents in a snow prone area, given that the ATVs and UTVs can keep working well on the snowy roads.

To Taiwanese suppliers who aim to strike gold with ATVs and UTVs in North America, Hartfiel gave advice that they should consider focusing on niche segments, such as industrial utility vehicles, golf cars and recreational utility vehicles, given that the local market for ordinary ATVs and UTVs has been dominated by prestigious brands, such as Yamaha, Polaris, Arctic Cat Wildcat and Can-Am Maverick, who have together left newcomers upset.

Hartfiel went on to say that Taiwanese manufacturers of powersports vehicles and related parts and accessories have been globally recognized for their achievements in product quality and system integration, as well as the capability of keeping inventories at reasonable levels all the times, which gives them the ability to better satisfy customers with low-volume, high-variety manufacturing services their peers from other countries of the world.

However, Hartfiel warned that the abovementioned traits may not assure Taiwanese companies of fruitful results from their investment in developing the U.S. powersports vehicle market as expected, especially at a time when it has been distinct from that in other regions in many aspects.

One distinct characteristic of the market, the veteran reporter mentioned, is the general preference among local consumers for buying fine-tuning parts and related accessories, simply for adding personalized features to their powersports vehicles. To adapt to this situation, he suggested that Taiwanese suppliers should not rush to exploit the market with their finished vehicles, but try in a rational mindset to build their presence locally as a priority at the very beginning by different means, such as forging OEM (original equipment manufacturing) partnerships locally, and then move forward with a long-term business strategy.