Taiwan's exports reaches a second-high for September at US$296.20 billion, compared to the same figures as last year, reported Ministry of Finance (MOF) statistics.

The island's exports have reached a three-month consecutive growth rate, however, among the four prime markets that Taiwan is exporting to, Southeast Asian markets have performed dismally: exports to the region have fallen for three months, despite the government's attempts to bolster its New Southbound Policy.

MOF states that September's export value grew 2.6% compared to last year's figures; compared to exports in August, last month was also a 4.7% growth. In the past nine months of the year, the island has accumulated US$250.1 billion in exports, a 8.1% year-on-year growth.

In Taiwan's four main export countries, last month saw steady growth in exports towards China, Hong Kong, the U.S., and Japan, with performance towards U.S. at the highest with 9.4%.

On the consecutive drop of exports towards the Southeast Asian region, the MOF suggested the decreasing demand of electronic parts in Singapore and mineral products to the Philippines as “systematic factors.” Government officials pointed to the Chinese government's aggressive move to bolster its semiconductor industry, resulting in global factories in Singapore's exodus to China.

That in turn had affected Singapore's demands for parts from Taiwan; the Philippines is also working closer with China to diversify its energy resources, decreasing its need for diesel from Taiwan.

Other factors that resulted in a positive September performance includes the U.S.-China trade war, which saw several industries transferring orders to Taiwan, as well as U.S. companies shipping orders out before the wave of tariffs were implemented last month. 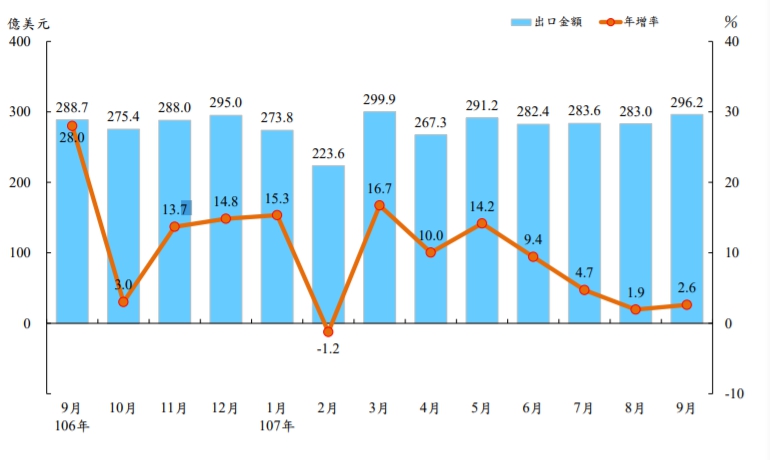