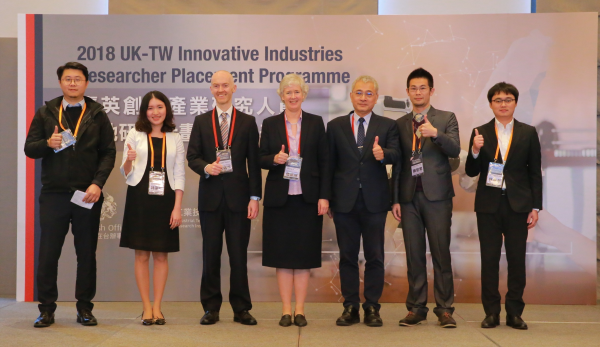 UKTW I2P is the first UK government-funded program of this kind, aiming to strengthen UK-Taiwan collaboration in key areas such as biotechnology, AI, robotics, clean energy, and autonomous vehicles. In the first year, the majority of the funding – £200,000 (NT $8 million) – was allocated to support Taiwanese researchers to conduct research at UK universities and R&D institutes, with additional funding for sector analysis and bilateral visits.

“Over the last year the UK-Taiwan Innovative Industries Programme has created a step-change in the collaboration between British and Taiwanese researchers. Eleven talented Taiwanese researchers undertook joint research at British institutions. The projects they initiated have significant potential across a wide range of areas, from medical devices to digital economy & advanced manufacturing. We expect these projects to benefit innovation in both the UK and Taiwan, and to create links that will last for many years to come. We are very grateful to ITRI for their professional and enthusiastic support in the delivery of this program,” said Catherine Nettleton, Representative of British Office Taipei.

As a key delivery partner of UKTW I2P, ITRI has been working closely with the British Office Taipei to foster a deeper science and research connection between Taiwan and the UK. Dr. Pei-Zen Chang, ITRI's Executive Vice President, stated that UKTW I2P provided a great opportunity to enhance UK-Taiwan scientific partnerships, and that many potentially beneficial research topics had already been identified since the launch of the program. In the future, he said, ITRI would devote even more efforts to paving the way for new topics and cultivating further the existing collaborative projects.

ITRI researcher Jih-Yang Chang, who participated in UKTW I2P, shared his experience of conducting research and work exchange in the UK. “Through this project, I collaborated with the British AIE Rotor Engine Company to integrate a rotary engine into the hybrid electric power system of an ITRI-developed UAV to reduce weight and improve fuel efficiency. The end result of this joint effort was phenomenal, and we were able to achieve the project's goal successfully!” Chang also visited Sheffield University and Imperial College London to make some great connections with their network of high payload and high duration commercial drone technology. He indicated that during his stay in the UK, he was impressed with the professionalism of the British research teams and glad to exchange valuable ideas with each other.

Another researcher Shih-Chun Lin, who is from the Department of Nursing at National Cheng Kung University, also shared her experience with the program. “UKTW I2P provided me with a meaningful platform to examine pediatric palliative care from different cultural perspectives and health care policies. Through my visits to ten British pediatric care organizations and talking with various specialists, I was able to share my views with the British pediatric hospice care professionals on the culturally-sensitive end-of-life care for families with Chinese-ethnic background while gaining valuable insights to input more international standpoints on Taiwan's pediatric hospice research and education,” Lin said.