In 2017, the value of Taiwan machinery first surpassed the NT$1 trillion mark at NT$1.1 trillion. The export value of Taiwan's machinery industry in 2018 amounted to US$27 .4 billion, exporting towards the island's top three destinations: China, the U.S, and Japan. On the other hand, the production value reached a record high of NT$1.18 trillion, representing a 7.3%. This year, the Taiwan Association of Machinery Industry plans to incorporate the smart machinery into the cloud by utilizing the sharing economy model to develop a national machinery cloud, assisting equipment manufacturers to introduce a cloud service platform, with expectations to reach a NT$2 trillion production value by 2025. 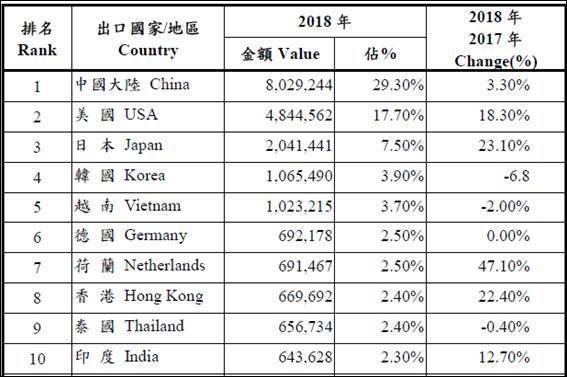 The main export countries of Taiwan`s machinery statistics in 2018 (currency unit：thousand USD, photo provide by TAM)
2019 Taipei International Machine Tool Show, hosted in March, is now the world's third largest machine tools exhibition. Taiwan Association of Machinery Industry (TAMI) Chairman Alex Ko attended the “Intelligent Manufacturing Innovative Application Forum” at the show, said in his opening speech that “the machinery sector is referred to as ‘the mother of all industries' and the machine tool is the mother of machines”. Taiwan is the world's fourth-largest exporter of machine tools after German, Japan, and Italy. Machinery exports in 2018 is US$27.4 billion in value and production value reached US$1.18 trillion. Since the production value hit NT$1 trillion in 2017, Taiwan's machinery sector is expected to grow at an annual pace of NT$100 billion. Without undergoing world wars, and a vast domestic market, it had not been easy becoming the fourth largest exporter of machine tools. Taiwan's machinery has been recognized by global buyers with its high level of quality, reliability, and price-performance ratio.

TAMI Chairman Ko said the development of Taiwan's smart machinery must be carried out under short-term, mid-term and long-term blueprints The short-term goal is to intellectualize machine equipment, connecting the traditional and new machines to the Internet so as to carry out remote control and maintenance. The mid-term goal is to accelerate the development of the sensor and the machine cloud, leveling up the competitiveness of Taiwan's machinery through the analysis of product information and machinery design. TAMI , National Cheng Kung University, Chunghwa Telecom Co., Ltd, Institute for Information Industry and other organizations are teaming up to develop the machine cloud, hoping firms will utilize related software and domains by renting or sharing the cloud. This allows the developers to collect data and deliver production information to strengthen remote services and foresee malfunction. The long-term goal is to build an industry-level sensor, and use the sensor and sensor module signal's feedback and analysis for surveillance, database building, and improve Taiwan's standing in the smart machinery industry.

Economy Slow to Warm-Up Due to Trade Tensions

As Taiwan's machine tool industry accounts for 70% of exports, it is prudent for investors to observe the changes occuring in the global economy first. While Taiwan's machinery industry has continued to grow, due to the fact that investors were less than willing to part with their money since the fourth quarter last year in light of trade tensions between China and the U.S. procurement of machine tools has gone down, causing orders for some firms to decrease as well . Estimating that the first half year is still capricious because of the trade war between China,the U.S and Brexit, the economy this year shows signs of making a comeback in the later half after a lukewarm first-half. In response to the trade war between the U.S and China, there is increasing need for establishing the second production bases especially in business-lucrative markets like Vietnam and India. . In the recent Taipei International Machine Tool Show this year, the potential order could reach US$1.6 billion while the annual growth rate is around 5% to 10%. If the performance goes well, the growth rate is expected to reach 10%.

Hsiao Wen-lung ,chairman Of Metal Forming Machinery Committee of TAMI, said Taiwan's customs statistics show that Taiwan exported total of US$530 million-worth of metal forming machinery from January to November 2018, a decrease of 5.3% compared to 2017 data. Some of Taiwan's main export markets include China, USA, Vietnam, India, Indonesia, Thailand, and Turkey. An analysis of this report showed that Taiwan metal forming machinery exports to China market had decreased over the months in 2019 due to the US-China trade war.However, exports to the US market were gradually increasing.

The 2018 China automotive sales report also suggested that the impact brought on from last year's trade tension debacle would surface this year.

Despite the gloom, Hsiao remarked that he is optimistic about the future of the industry, as the demand and development for automated equipment will only increase.Overall in 2019, the biggest variable to influence global markets still lies in the outcome of U.S.-China trading negotiations. I Hsiao expects there will be a likewise slow demand in the first half but more growth in the second half of the year. In the first-half, firms will still need to deplete their inventories and allow for more orders e to come in the second-half for automated and smart machinery and equipment.

Among all the markets matching the government's New Southbound Policy, India and Vietnam are forecasted to have better market prospects, while Turkey, and the U.S. are considered for their business potential in machinery sales triggered by their transformation to automated production.