Though not often talked about in the industry but the fact is that most of the currently available lighting sources as LCDs, plasma panels, LEDs, traditional and compact fluorescents etc. all emit light, instead of reflecting light off surfaces to be absorbed by the human eye, which is nature's plan. The makers and sellers of these light sources won't, for obvious reasons, talk about one of their major downfalls: causing eye fatigue, in extreme cases dry eye, after prolonged exposure. But the Holy Grail in artificial lighting may have been found in Taiwan, specifically by a material science and engineering professor at the National Tsing-Hua University in Taiwan. J.H. Jou and his graduate-school students have discovered a way to faithfully simulate sunlight, and perhaps offer much needed relief for countless workers in the e-age. 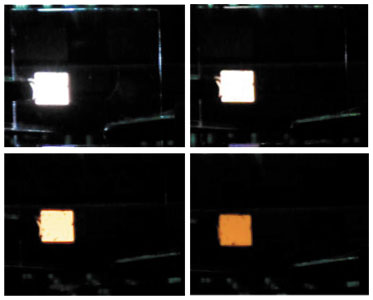 Simulating Sunlight
"By varying the voltage through the OLED panel from three to nine volts can produce ambient light simulating natural light that changes from dawn to dusk. Truly there is genius in simplicity as this plain driver-IC can automatically modulate the voltage to render any desired color temperature between 2200 and 8000 K anytime," says Jou, who is also credited with reportedly introducing the world's first OLED rated at 51 lumen-per-watt in 2002.

As the discovery of Velcro, a fluke led Hong Kong-born Chinese scientist Dr. Ching W Tang and Steven Van Slyke at Eastman Kodak to eventually invent in 1987 the first OLED: one day in 1977 the scientist doubled back to the lab to pick up something forgotten only to see an experimental organic battery glowing in the dark, and the rest is history.

An OLED is typically of a micro-multilayered structure sandwiched by an aluminum cathode layer and another anode layer of transparent indium tin oxide (ITO), with layers of organic semiconductors in between.

The major difference between OLED and LED is the illumination format: the former being a panel-light source whereas the latter a dot-light source. Also, developers of the two have gone in different directions, with OLEDs, which are markedly thinner than LCD modules, competing against liquid crystal display (LCD) while LED mainly being developed as lighting.

Open Mind Helps
As a display medium, Jou notes, OLED is seen as a flop when the voltage applied keeps varying. But keeping an open mind may have helped the scientist for an impractical display medium, one hobbled by varying voltage, has turned out to work well as a groundbreaking light source. Around a year after developing a voltage-controllable OLED, Jou's team unveiled a workable technology in July this year, which the professor says is the world's first OLED light simulating sunlight.

According to Jou, a University of Michigan PhD in macro-molecular science and engineering, Lumiotec, a lighting subsidiary of Mitsubishi Heavy Industries, is the world's exclusive supplier of OLED lights, but its products are mono-chromatic-giving off light as if on a cloudy day.

Multi-nation Patent Pending
Besides having applied for patents on the OLED technology in five nations, including the United States, South Korea and Japan, Jou has also had relevant papers published in the Applied Physics Letters (APL), an American Institute of Physics' journal that features reports on significant findings in applied physics.

The discovery of the OLED lighting technology has Jou bubbling with confidence, so much so that the professor touts the technology will dominate indoor lighting. "OLED's non-flickering, sunlight-simulating, non-irritating characteristics wield pivotal advantages over fluorescent lamps and LEDs as indoor lighting. Although incandescent bulbs are also easy on the eye, they are energy-inefficient and produce excessive heat," he notes.

The variable chromaticity, sunlight-simulating characteristics of OLED, Jou stresses, make such light source especially desirable in high-latitude countries, where winter nights are much longer than daylight hours. "So OLEDs allow residents in northern latitude nations to enjoy natural daylight even during gloomy winters," he notes.

Aiming to reduce CO2 emissions by 20% by 2020, the EU has partially funded two research projects focusing on OLED technology through its Research Framework Program. In June 2008, the project announced its success in developing a white-light OLED with 50.7 lumens-per-watt, a start-up brightness of 1000-candelas per-square-meter, and a lifetime above 10,000 hours. In September 2008, the OLED100.eu project began aiming to develop OLEDs with 100 lumen-per-watt, the current benchmark.

According Jou, a May 2009 German academic journal reported an OLED with 90 lumen-per-watt at 1000 candela-per-square-meter. "Japanese manufacturers plan to mass-produce 50-lumen-per-watt OLEDs at 5,000 yen per 15-square-centimeter in 2011," he says. "OLEDs have come a long way...initially they only shone at less than one lumen-per-watt," Jou notes.

Big Player Support
Such lighting technology is apparently not a fad. Jou says that OLED's user-friendly characteristics are as attractive to major players as light to moths: bringing onboard the world's top- three lighting makers Osram, Philips and GE as well as Taiwan's display-panel players as AU Optronics and Chi Mei EL Corp. The professor estimates OLED lighting to generate up to NT$200 billion (US$6 billion at US$1:NT$33) in 2018 global revenues, and command one quarter of the world's lighting market in 15 to 20 years, as well as reduce nearly seven million metric tons of green-house gases.

In spite of considerable support of big players, the OLED path is not unconditionally lit with promising light for technological hurdles awaiting to be cleared. Jou notes that, despite OLEDs being better wide-area illuminators than LEDs, rising panel size tends to compromise luminous efficacy, with the function of doubled brightness and lifetime becoming a critical issue.

Challenges notwithstanding, Jou remains upbeat about the future of OLED lighting. "White-light OLEDs, at its unveiling in 2000, emitted only one lumen- per-watt. Such brightness has risen to 50-60 lumen-watt along with panel sizes. So we can reasonably expect to see the OLED100.eu project to deliver 100-square-centimeter panels emitting 100 lumen-per-watt that are priced below 100 euro," he notes.

Philips Research is already contemplating even brighter dreams. A Philips Lighting scientist says that 150 lumen-watt OLEDs should be achievable once the 100 lumen-watt threshold will have been crossed.