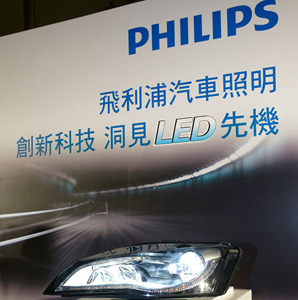 Until now, automotive LEDs have used complex, expensive driver ICs designed for generic Solid State Lighting (SSL) applications that lack many of the critical functions needed for automotive applications. As automotive SSL becomes more prevalent in the car, lighting control unit makers and LED distributors urgently need more efficient solutions to enable OEMs to maximize the full benefits of energy-efficient LEDs, which can reduce fuel, battery consumption by approximately 50% relative to incandescents in some applications. By integrating the core functions critical to automotive LED lights, NXP claimed, the ASL1010NTK/ASL1010PHN driver ICs offer a compact, all-in-one solution without needing many additional components, enabling more cost-effective, reliable LED module design. The decisive advantage to compactness is being able to maximize volume-utility in automotive applications where available space is rare under the hood, or bonnet as the British call it, and even less around lighting. At the same time, the NXP system solution offers flexibility, meaning applications are available for various platforms, configurations, output voltages, and numbers of LEDs. 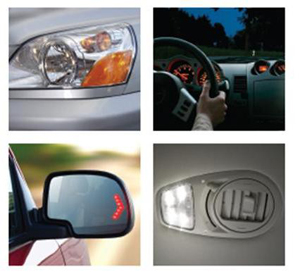 Boon-Hooi Lim, product manger of Avago Technologies, said that automotive LED applications in fact are not new, having been used for dozens of years as dashboard warning lights, interior illumination, turn signals, taillights and brake lights, all of which have been developed with high-brightness LED technology. Citing an ubiquitous and increasingly common example, Lim said that many cars now adopt rear combination lamps (RCL), a pod integrating the brake, turn-signal, tail light and reflectors.

In 2008, Audi showcased the world's first LED headlight on its Audi R8, a sporty way to debut the era of mass produced LED headlight.

The Taiwan-based Industrial Economics & Knowledge Center (IEK) of the Industrial Technology Research Institute forecasts that the penetration of LED auto lighting is expected to reach 8% in 2011, with revenue having increased from US$690 million in 2007 to a projected US$1.2 billion this year at a compound annual growth rate (CAGR) of 13%.

Bright Asian Market
LED brake lights already are widely installed but the penetration is expected to slow down; while the penetration of LED headlights, far lagging that of mainstream high-intensity discharge (HID) counterparts, is expected to rise to about 3% this year, compared to about 15% for LED taillights. Asia is set to be the market with the highest growth in automotive LED lighting, the center said. 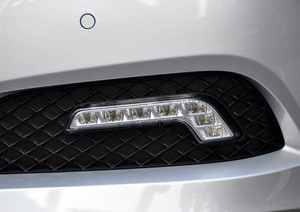 Strategies Unlimited's research shows that the automotive interior-illumination market is made up of 60% of LED lighting, with third brake light, instrument lighting, LED lighting etc. achieving 90% penetration in European makes and models, compared to 50% of the global average for LED third brake lamps.

Industry experts said that LED makers expect surging adoption of automotive LED backlighting and illumination in the near future, and likely was referring to Asia. 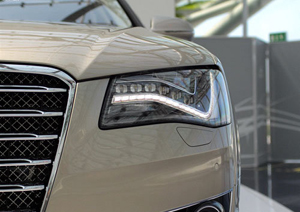 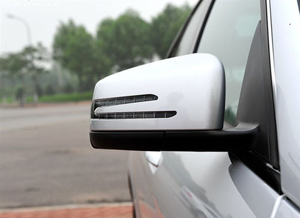 It's debatable whether upscale carmakers in the U.S., Europe and Japan are installing more LED lights in cars to enhance overall appeal, merely follow the trend in LED lighting, or to actually achieve higher eco-friendliness as politically-correct strategy, but drivers, and especially those who can fully appreciate the benefits of LED lighting, can't seem to lose, even at slightly higher prices.