Automotive electronics have been rapidly replacing traditional mechanical systems in modern transportation vehicles, especially in systems requiring more precise control and faster response time. TRW Automotive, a major global tier-1 parts supplier, estimated this year that automotive electronics now account for 40% to 50% of a vehicle's cost, compared to about 20% 10 years ago, and the ratio is increasing. 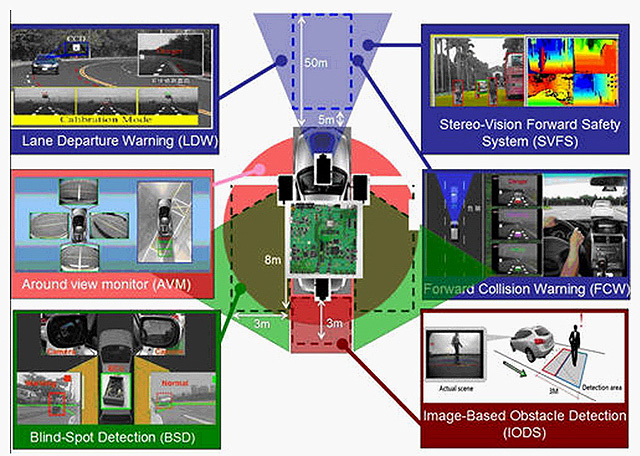 For example, the center says, the LDWS will emit alarms when a vehicle is too close to the lane sidelines, and the driver state monitor (DSM) will alert the driver when the system detects that the inclination of his or her head is too great. In accordance with algorithm characteristics, LDWS will use a lot of system resources to move data, so it is more suitable for use on the FPGA. The latter requires more sophisticated mathematical algorithms, and the DSP can execute them more efficiently. Through the ARM platform, these two systems will record vehicle safety data (to provide evidence in case of an accident), and the DSP and FPGA cores will be shut off when the vehicle is idling or backing to save energy.

The Center explains that image-based vehicular safety systems are inevitably becoming more and more sophisticated, and that the biggest challenge now is to design and develop safety systems that function better and do not impose a heavier load on the power supply system. Its multi-core safety system integration design, the ARTC claims, permits the use of a single module for different systems to simplify product design and shorten development period while achieving the best system-resource distribution and providing needed algorithm capability. This is a major development, the Center stresses, in the development of the image-based vehicular safety systems of the future.