Sales growth of new cars in Taiwan turned positive in the second half of 2013, causing the annual sales to rise 3.4% to hit 378,000 units, according to the Automotive Research & Testing Center (ARTC), a transportation vehicle R&D and testing hub in on the island.

In the first half of 2013, new-car sales stagnated due mainly to consumers' wait-and-see attitude caused by the sharp depreciation of the Japanese yen (most locally-assembled cars are Japanese), anticipation for government's possible subsidies for old-car replacement purchases (which never materialized), resulting in a 1.9% decrease from the same period of previous year.

In the second half, all major car brands began launching new models to realize potential purchases; while the year-end international auto show in Taipei further boosted demand, leading to an 8.9% year-on-year (YoY) increase for the period.

ARTC says that new-car sales grew strongly at the end of the third quarter, driven by most brands launching new-year models. Since September, new-car sales volume has continued increasing for four months in a row until December.

Imported Cars
Imported cars rapidly gained a market share of about 30% in 2013, a new record high on the island, to which ARTC attributes rising price tags of locally-assembled models and aggressive introduction of entry-level models of luxury car brands by local agents. The narrowing price gaps between  locally produced and imported cars create more options for local consumers, of whom a big portion opted to pay a little more to enjoy affordable luxury and cachet. 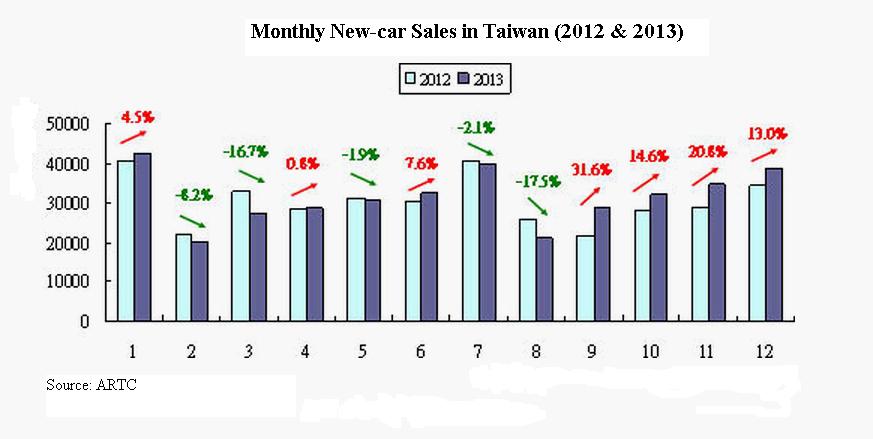 ARTC says that the automobile market in Taiwan weathered  difficulties in the first half of 2013, exasperating worries of auto makers and vendors. In 2014, the center forecasts new-car sales on the island to remain strong in January before the start of Chinese New Year, but to begin facing realities ahead in March.