Thanks to the highest year-on-year (YoY) growth since 2009 in December, passenger-car registrations in European Union (EU) finally contracted by 1.7% in 2013, compared to a 1.0% increase of commercial vehicles, according to ACEA (European Automobile Manufacturers' Association)
With a 13.3% increase in new car registrations in December 2013, the EU (27 nations) recorded the largest monthly YoY growth since December 2009 (+16.6%). However, in absolute figures, the results were the third lowest to date, since ACEA recorded new registrations in the EU in 2003, for December with a total of 906,294 units.

From January to December, the EU market recorded more than 11.85 million new cars. With a contraction of 1.7% in 2013, new-car registrations have been on the decline for six consecutive years. In terms of annual volumes, 2013 is the worst year since 1995 (15 EU countries at the time), and the worst ever since ACEA began the series in 2003 with the enlarged EU. 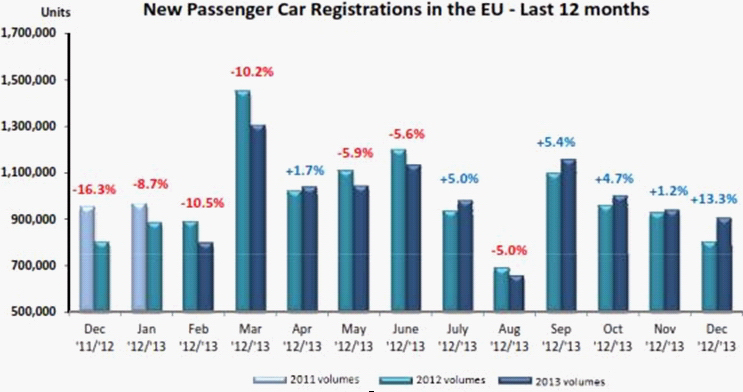