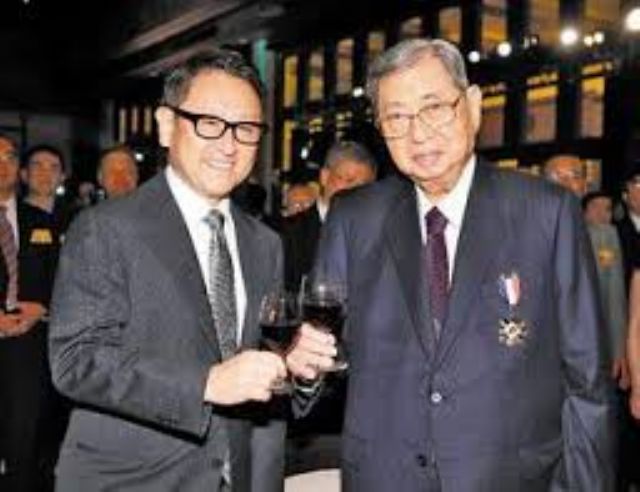 Addressing the attendees at the ceremony, Toyoda announced that Kuozui targets annual production volume of 200,000 cars, including some 100,000 units for export, with the Taiwanese subsidiary expected to report revenue of more than NT$100 billion (US$3.33 billion) for the first time, making it the first world-class automaker on the island.

Kuozui is a joint venture between Toyota Japan (70%) and Hotai Motor Co. Ltd. of Taiwan, local agent of Toyota and a major car seller in Taiwan. Attending Kuozui's 30th anniversary was Toyoda's first public event in Taiwan since taking the helm as Toyota's president in 2008.

Toyoda also expressed appreciation for Taiwan's patronage for Toyotas, as well as Taiwanese aid to Japan after the March 11, 2011 massive earthquake.

A senior Kuozui executive pointed out that with support from Toyota Japan, Kuozui began exporting locally assembled Toyota Corolla Altis sedans in 2009 with the first annual export volume of some 7,000 units. In 2013, Kuozui's export volume increased to some 81,000 units, and is expected to outstrip 100,000 in 2014, which is expected to help generate production value of more than NT$20 billion (US$666.7 million) for the local automotive industry,

With the start of production of several new  models for domestic sales and the local automobile market recovering, Kuozui is also expected to deliver some 100,000 cars to Hotai.

Su Yann-huei, former chairman of both Kuozui and Hotai, recalled taking over a financially-troubled automobile company in 1984 and turned it into Kuozui. After 30 years of development, Kuozui is expected to finally achieve an annual production goal of 200,000 units, which was announced and pursued by the government many years ago.

Kuozui operates two auto assembly plants both in Taoyuan County, northern Taiwan: one in Chungli with annual production capacity of some 100,000 units, and another in Guanyin about 66,000 units.