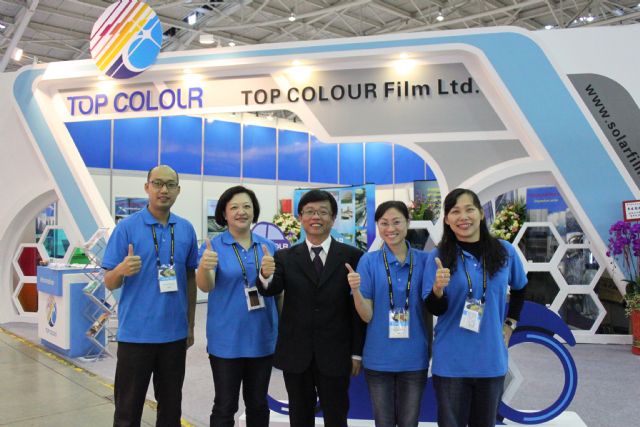 Top Colour president Robert Tsai, center, and his company staff pose in front of his company's booth at 2014 Taipei AMPA.
At the 2014 Taipei AMPA, Top Colour Film Ltd., a technically leading manufacturer of solar window film in Taiwan, showed all its major film products to international buyers. Robert Tsai, company president, claims that Top Colour is not only a leader in the sector globally, but also the only supplier in Taiwan offering multiple metal sputter films (coated with silver, titanium etc. particles) produced with top-end equipment.

Top Colour operates four factories in Taiwan and China, including two in Taiwan with more than 100 employees, and two others in China (one in Guangdong Province and another in Jiangsu) with more than 300 employees. Products manufactured at the two Chinese factories are sold in the domestic Chinese market, with those made in Taiwan exported globally. Currently, about 80% of the firm's films are for automotive applications, and the remaining 20% for construction.

With highly efficient production, made possible by advanced equipment with superior management system, Top Colour always offers the best quality at reasonable prices. Top Colour exports worldwide, especially to the U.S., Europe, the Middle East, and Latin America. The company globally distributes films, with about 10% under its own Top Colour brand and 90% going to big international brands on the OEM/ODM basis.