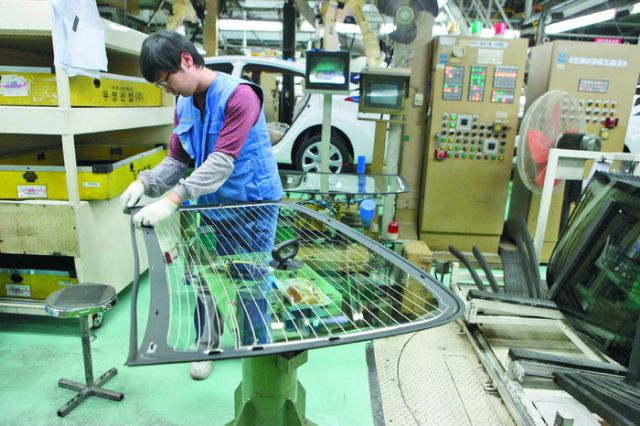 Thanks to strong demand from both AM and OE customers, many Taiwanese auto-parts makers have been expanding production capacities. (photo from UDN)

In addition to strong demand from global automakers for Original Equipment (OE) parts, demand from global aftermarket (AM) has been promising thanks to the recovering economy in North America (world's largest market for AM replacement parts), and extreme weather in Europe and North America in the first half (H1) of the year that delayed  demand to the end of Q2, both of which drove revenues of local AM-parts makers.

Industry insiders say Q3 is the traditional off-season for auto-part makers, especially those focusing on the AM business, many of whom chose to expand capacity before the coming of peak demand in Q4.

In conjunction with aggressive and intensive restructuring for over  three years, Tong Yang, a major Taiwan-based supplier of AM body parts and OE supplier to local and international automakers, said its order-receiving capacity has been greatly raised. This year, Tong Yang's supply-shortage rate has been successfully reduced to sub-10%, with its revenue hitting record highs almost every month. In addition, Tong Yang's OE-parts coating production lines in Yangmei, northern Taiwan, have broken through a bottleneck to double production capacity. Two of Tong Yang's Chinese subsidiaries (in Xiangyang, Hubei Province, and Foshan, Guangdong Province) kicked off mass production, with strong demand from Chinese automakers  expected to immediately fill the production lines.

Hota, an OE transmission gearbox and precision-gear supplier to international automakers and tier-1s, has been hitting new revenue records monthly this year, thanks to increasing shipments to major customers such as Tesla Motors (American maker of premium electric cars) and BorgWarner (global tier-1 parts vendor). The company's existing factories in Tali and Central Taiwan Science Park (CTSP), northern Taiwan, have not kept up with demand, and so urgently completed the construction of its second Tali factory in late July, and will kick off production by year-end to temporarily ease capacity tension.

To cope with business growth, Hota's board has resolved to construct another factory at a plant campus in Chiayi Dapumei Intelligent Industrial Park, southern Taiwan, to cover floor area larger by about 40% than Hota's CTSP factory and spacious enough for eight automated production lines to generate annual production value of NT$3.5 billion to NT$4 billion (US$116.7 million to NT$133.3 million).

TYC, a major maker of auto lamps in Taiwan, has been winning flooding orders this year for AM replacement lamps. The firm recently bought 226,800 sq.ft. of land in Tainan Technology Industrial Park (TTIP), southern Taiwan to build its second auto-lamp factory in the park.

The lamp maker said it will move all the OE-lamp production lines at the existing TTIP factory to the new factory, to avail more space to install production capacity for AM replacement lamps, demand for which is expected to further increase.

The company said it had originally planned to buy new land for constructing a factory but instead found an existing facility meeting the firm's requirements.

Tung Thih Electronic Co., Ltd. (TTE), a major OE automotive-electronics supplier to international automakers, is also constructing its second Chinese factory in Kunshan, Jiangsu Province. The firm has won new orders from international customers and is expected to greatly expand operations over the next few years by supplying parts for many new car models.