The Certified Automotive Parts Association (CAPA) program certified 61% more part applications from auto part makers in the first half of 2014, compared to the same period in 2013, according to CAPA, a auto-parts certify body in the U.S. The association also said that 30% more CAPA certified parts entered the market in the same comparison period.

The CAPA is a non-profit organization established in 1987 to develop and oversee a test program guaranteeing the suitability and quality of automotive parts. CAPA claims that it encourages competition in the marketplace in the hope that their program will ultimately reduce expense to the consumer and the industry while increasing and assuring part quality.

In addition to the dramatic increase in CAPA Certified parts in the market, CAPA has been growing rapidly, adding 10 new participating manufacturers between 2013 and the end of July 2014. The association now has 50 manufacturers that meet its high standards for quality and safety, the association said.

Caption 1: The number of CAPA-certified auto parts has been increasing rapidly in recent years. (Photo from CAPA)

These above-mentioned statistics demonstrate the importance of CAPA Certified parts to both insurers and collision repair shops. “Most importantly, given reports such as those recently released by Honda, they show that insurers and shops understand the risks associated with the use of non-CAPA Certified parts,” said Jack Gillis, executive director of CAPA. “While insurers and shops are reducing the risks associated with aftermarket parts, the big winners are consumers who are getting more and more fairly priced, high quality parts for one of their most prized possessions, their vehicle,” said Gillis.

The CAPA Seal remains the key to protecting consumers from poor quality and potentially unsafe parts. More and more shops are using CAPA's unique two-part seal to prove to both their customers and their insurance partners that they insist on true quality when alternative parts are used. 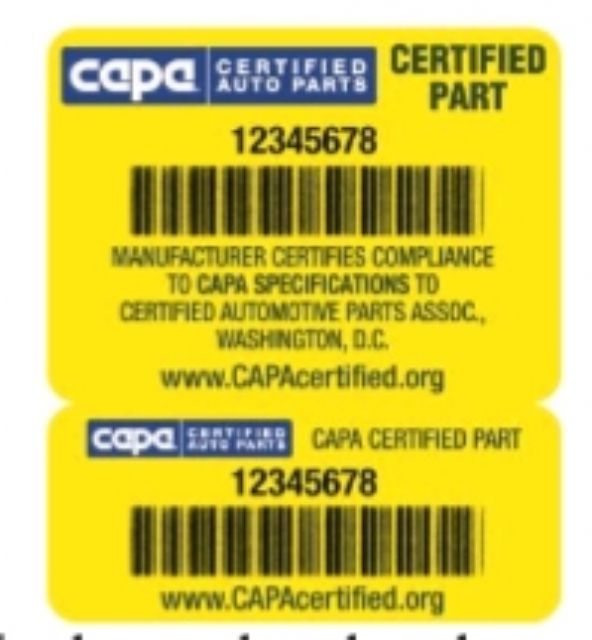 Caption 2: CAPA claims that the CAPA Seal remains the key to protecting consumers from poor quality and potentially unsafe parts. (Photo from CAPA)

Not only is the presence of the CAPA Seal the only way to prove that a particular part is CAPA Certified, but each seal comes with a unique barcode and number to allow both uncontested confirmation of CAPA Certification and full traceability through the CAPA Tracker. "CAPA is able to compile specific statistics on part usage in the marketplace because every seal is uniquely numbered and every part with a seal is registered—as such, we know exactly how many CAPA Parts are available in the market," said Gillis.

"We often hear shops complain that they ordered a CAPA part, but there was no seal," said Debbie Klouser, CAPA's director of operations. "The fact is, it doesn't matter what was ordered, how the part was listed on an estimate, or what appears on an invoice. If there is no CAPA Seal on the part it is not CAPA Certified," said Klouser. Given the wide range of the quality performance of alternative parts available in the market, it is imperative to look for the CAPA Seal, the association claimed.