In fact, thin film transistor-liquid crystal display (TFT-LCD) shipments for auto instrument clusters are expected to grow 48% to 30.2 million units this year, and further to reach 50 million units by 2018. 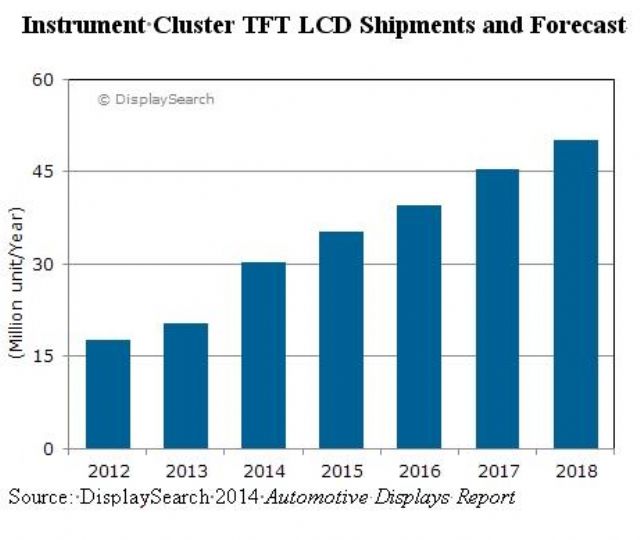 Taiwanese panel suppliers are expected to win a 40% share in the global automotive panel market, making Taiwan the largest producer of such product. As such ever more local companies have been tapping into supply chains of international vehicle manufacturers: TPK Holding Co., Ltd., a touch-panel maker on the island, recently won an order from American electric car maker Tesla Motors Inc. for 17-inch touch-control panel for center console.

TPK's touch panels are also to be installed on new French car models in 2015, with Japanese and German automakers having inquired about such product from TPK.

Global Lighting's light-guide panels have been certified by many international companies, and will be soon adopted by Lexus, BMW, Mercedes-Benz etc., through tier-1s Gentes and Bosch. AimCore supplies film-plated glass to Japanese automakers; while Radiant is scheduled to enter the automotive application market in 2015.

After few years of effort, Chunghwa Picture Tubes, Ltd. (CPT), another major panel maker in Taiwan, has become the largest supplier in the Japanese car-display aftermarket by winning a 80% market share, having also tapped into supply chains of Japanese, American and Chinese automakers.

If all proceed without glitch, industry sources say Taiwan could soon replace Japan as the world's largest production center of automotive-application panels.