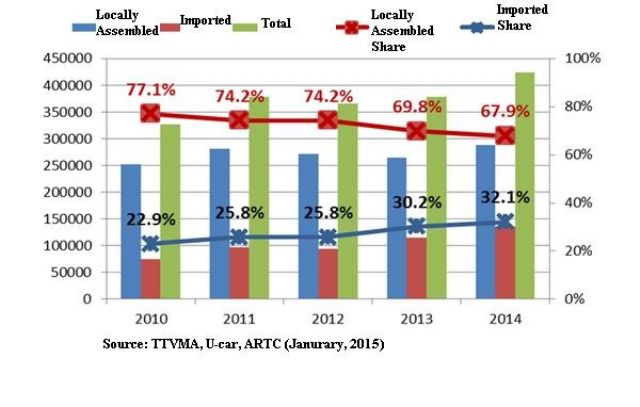 New-car Sales Volume in Taiwan (2010-2014).
More noticeable is, the center said, that Taiwan exported about 96,000 cars in 2014, a 16% year-on-year (YoY) increase to again set a new record for the local automotive industry. Thanks to  increasing exports by local automakers, total automobile production volume on the island climbed to about 379,000 units last year, including more than 200,000 units produced by Kuozui Motors Ltd., a major auto assembler and exporter in Taiwan of Toyotas.

Yulon Nissan Motor Co., the Nissan agent, rose to its highest ranking in the domestic market for the first time in the past 10 years by replacing affiliate CMC, the local assembler and agent of Mitsubishi. Yulon Nissan sold 47,741 new cars, the highest annual volume for the company since 2008, for market share of 10%. 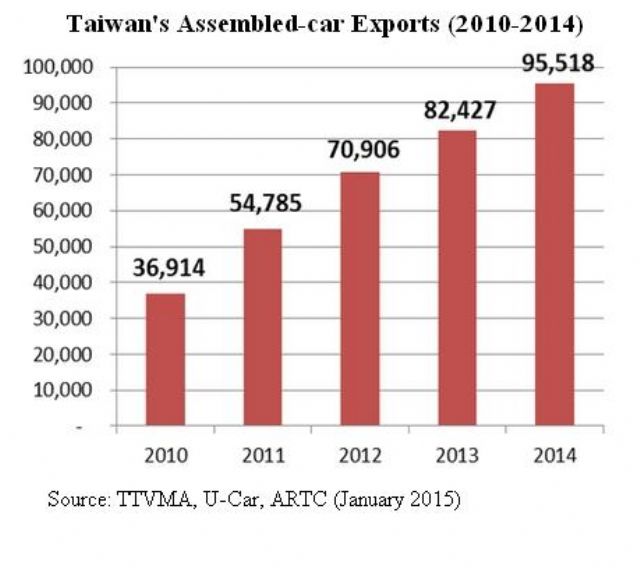 The automotive center forecasts that in 2015 new-car sales in Taiwan are expected to continue rising  due to several positive factors, including replacement purchases, falling fuel prices, depreciating euro and Japanese yen etc., but warns that strong local demand could enable  imports erode shares of locally-assembled cars, and more and more international auto vendors are expected to set up own subsidiaries instead of contracting agents as before. So the ARTC says local automakers should think more about  upgrading product competitiveness while increasing exports to offset lost market share.