Smartphone, Automotive Display Revenue Swelled in 2014 As Demand for Others Stalled: IHS

As smartphones cannibalized product sales in other small/medium flat-panel-display (FPD) categories in 2014, automotive display revenues rose to become the second-highest growth category, according to IHS. 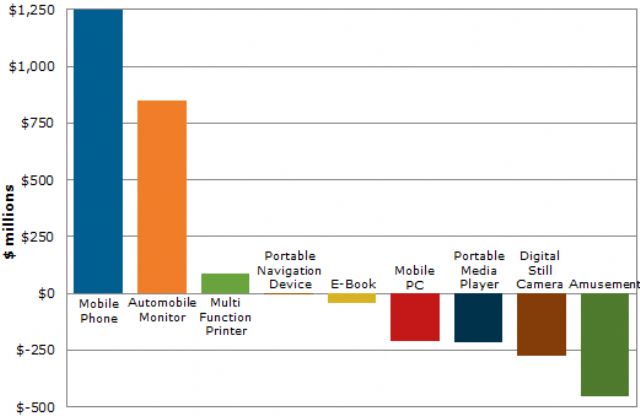 Based on the latest information from the IHS Technology Quarterly Small/Medium Shipment and Forecast Report, in 2014, automotive display revenues (not including aftermarket displays) increased 26 percent year over year (YoY) to US$848 million. The cellphone display market increased 4 percent, reaching US$1.2 billion, while multi-function printer displays rose 148 percent to US$85 million.

“Mobile phone displays continue to lead ongoing small/medium flat-panel market growth, as the functional distinctions between smartphones and other devices blur,” said Hiroshi Hayase, senior director for displays at IHS Technology, formerly with DisplaySearch. “Given that consumer demand in many small/medium FPD categories is falling, rising demand for automotive displays is a bright spot for the industry.”