Continuing a growth trend from 2013, when about 80 million units were sold, sales of new cars worldwide increased by about 4% to reach some 85 million units in 2014, though regional markets showed ups and downs, according to the Automotive Research & Testing Center (ARTC), Taiwan's leading transportation vehicle R&D and testing institute. 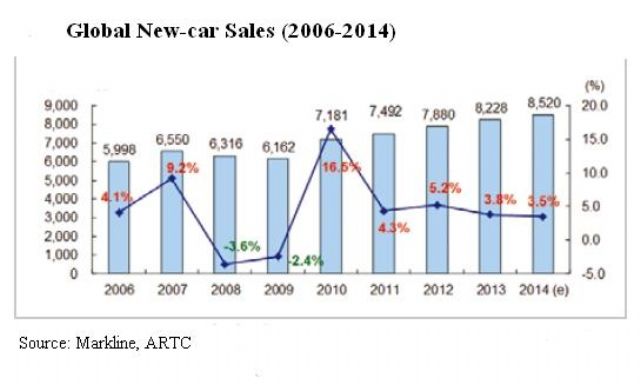 America
In United States, the world's second-largest automobile market, new-car sales grew by about 5% to 16.8 million units in 2014, marking the fourth consecutive year of growth.

Brazil, the largest single automobile market in South America, has enjoyed a boom in new-car sales for many years, thanks mainly to rapid economic growth and improved infrastructure. Brazil was the world's fourth-largest automobile market since 2010, However, new-car sales in 2014 stopped growing and slipped by 7% to only about 3.5 million units, due to higher car prices (new compulsory laws requiring all new cars to be equipped with more safety equipment) and flagging economic growth.

Europe
The European automobile market finally turned around last year. In Germany, some 3.31 million new cars were licensed, up 3%. In the U.K. the volume increased by 9.5% to reach 2.84 million, while France and Italy posted new-car sales gains of 0.4% and 5.3%, respectively, to 2.17 million and 1.46 million units. 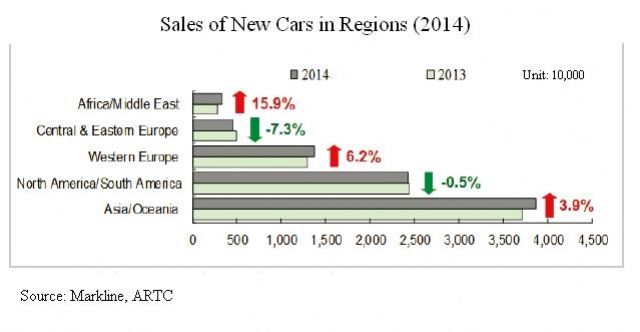 Volume and Capacity
ARTC says that strong global demand for new cars in 2014 led to a 1.3% expansion in global car production. However, in the capital- and technology-intensive automotive industry, more than 80% of new-car production capacity was concentrated in a few nations. In the first three quarters of 2014, for example, the top-12 automobile production nations together turned out 54.9 million new cars, representing a share of 86%. Currently, the world's most important auto producing nations include China, the U.S., Japan, Germany and South Korea.

Japanese automaker Toyota continued its leading position as the world's No. 1 in 2014; and thanks to sales growth in major markets such as the U.S., China and Japan, the group's global sales volume increased by 3% from previous year to reach 10.23 million units. Long-term cultivation and continued sales increase in the big Chinese market, as well as smooth sales worldwide, helped Germany-based Volkswagen Group to become the world's No. 2 auto vendor. The company sold 10.14 million new cars worldwide in 2014, up 4% from previous year and bringing it within a hair of Toyota's record. 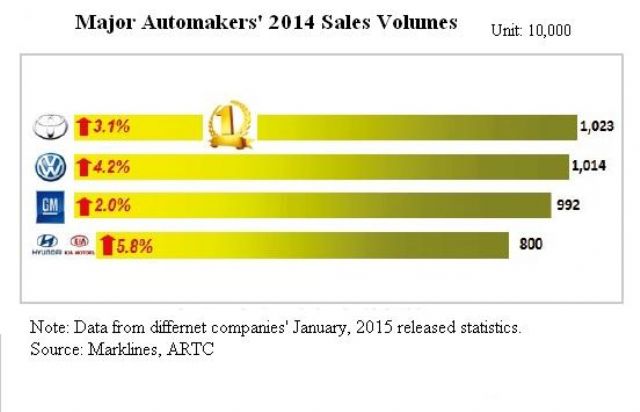 American automaker GM, the No. 3 automaker, enjoyed smooth business gains in its home and Chinese markets, though sales in Brazil and Russia dropped, leading to only a 2% year-on-year (YoY) volume increase in 2014, to 9.92 million units. The fourth-largest automobile manufacturer was Korea-based Hyundai-Kia Group, which achieved global sales of eight million units, up 5.8% YoY. Together with other major players, like Renault-Nissan, Ford, Fiat-Chrysler Group, Honda, PSA and Suzuki, the top-10s accounted for more than 70% of global new-car shipments, or about 60 million units, in 2014. 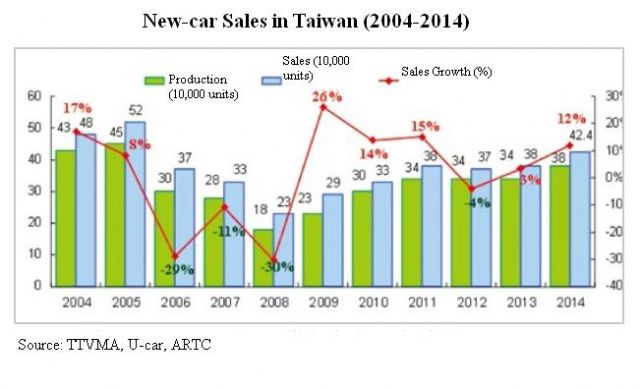 Yulon Nissan Motor Co., the local agent of Japan's Nissan, took the top spot in the domestic market for the first time in a decade, replacing affiliate China Motor Corp. (CMC), the local assembler and agent of Mitsubishi. Yulon Nissan sold 47,741 new cars, up 8.5% YoY and the highest annual volume for the company since 2008 to win a market share of 10%. CMC sold 43,538 units, up 3.4% YoY, taking the No. 3 position. No. 4 Ford Lio Ho Motor Co., a subsidiary of American automaker Ford, increased sales by 2.5% to 24,703 units, while Honda Taiwan Motor Co. trailed slightly behind with 24,599 units.

ARTC pointed out that a noticeable trend in the 2014 Taiwanese automobile market was a 32% market share won by imported cars (136,000 units sold), the highest in 13 years, with Mercedes-Benz, BMW, Lexus, Volkswagen (VW), Audi, and Volvo hitting record sales volumes on the island to enjoy clear sales growths in the local new-car market. In 2009, imported cars won only a market share of about 20%. Mercedes-Benz again led import brands in Taiwan in 2014 by selling more than 19,000 units, followed by BMW and Lexus.

Car Exports
In conjunction with the increased sales volume in the domestic market, as well as increasing exports of locally assembled cars, local automakers' total annual production also hit a record high since 2005, to about 380,000 units, a 10% increase from 2013.

Taiwan's assembled-car exports have been increasing steadily in recent years with policy support from the government and local automakers' efforts to improve quality. The annual export volume first broke 80,000 units in 2013, and it climbed by 16% in 2014 to some 96,000 units, a new milestone for local automotive industry. Kuozui is is Taiwan's top auto exporter, accounting for 98% of local assembled-car exports in 2014, with the remainder shipped by CMC. Major export markets for Taiwan-assembled cars are Middle East nations such as Saudi Arabia and the U.A.E.

However, ARTC warned that the the falling Japanese Yeh has provided momentum for Japanese-made cars. As a result, increasing exports from Japan-assembled cars are certain to have an impact on the volume of Taiwan-made models in the future.