Driven by auto vendors' aggressive new-model launches, a total of 7,135 small/medium (or compact) luxury sport utility vehicles (LSUVs) were sold in the first six months in Taiwan, up 279.6 percent from the same period of last year, or year-on-year (YoY), according to statistics compiled by the Ministry of Transportation and Communications (MOTC).

As result, the small/medium LSUV has become a major segment in the luxury-car market that is typically composed of vehicles priced higher than NT$1.5 million or US$50,000.

The Lexus NX-series, with either hybrid powertrain or turbo engines, won the top position in the emerging segment with about 2,100 units (all imported) sold in the first half (including more than 1,300 NX300h sold in the four months after launch). 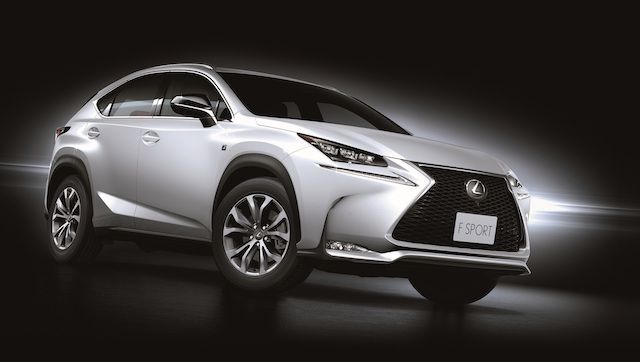 The Lexus NX-series (NX200t shown) with either hybrid powertrain or turbo engine wins the top position in domestic small/medium LSUV segment with about 2,100 units sold in H1, 2015, including more than 1,300 NX300h sold in four months after demonstration.

Thanks to several positive factors, such as the recovering domestic economy, falling gas prices, and the coming of the 10-year replacement cycle, industry experts say, this year's domestic new-car sales are expected to continue remaining buoyant after hitting a nine-year high record of about 430,000 units in 2014. Especially the luxury-car segment, the experts added, which saw about 20 percent YoY increase in the first half. Currently, the domestic luxury-car segment is mainly dominated by luxury import brands such as Mercedes-Benz, BMW, Lexus, etc.

The experts also added that small/medium LSUVs with total vehicle length less than 4.7 meters saw sales explode in the first half, enjoying triple YoY growth, with the accumulated January-June volume already close to the 8,750 units sold in 2014. Some auto vendors predict the total domestic small/medium LSUV sales volume could challenge a record high exceeding 12,000 units in 2015.

In the past five years, several models have been launched in the segment, including the BMW X3, BMW X1, Volvo XC60, Mercedes-Benz GLK etc., to collectively have driven the segment volume from about 3,500 units a year to 8,750 in 2014. As result, the small/medium LSUVs' share of the luxury-car segment in Taiwan has risen from less than 8 percent few years ago to 13.5 percent last year.

This year the segment has become even-more popular amid more product launches by luxury brands, such as the Porsche Macan, Mercedes-Benz GLA etc., resulting in very high sales volume in the first half, during which small/medium LSUVs accounted for about 20 percent of the luxury-car segment. To fully tap business opportunities, Lexus has introduced the NX200t turbo, with the Japanese headquarters having decided to increase supply volume of the new turbo model to Taiwan to fill flooding orders in the second half. Such move has placed the Lexus NX-series as the top-seller in the Taiwanese small/medium LSUV segment.

Hotai Motor Co. Ltd., agent of Toyota and Lexus in Taiwan, reportedly still holds many orders for NX200t, which means steady sales of the NX-series throughout the year-end.

From early this year, Taiwan's Porsche agent Universal Motor Traders Ltd. began delivering the Porsche Macan small/medium LSUV at an average monthly volume of 200 units, and the new model then replaced the larger Cayenne SUV to be the most popular model under the Porsche line in Taiwan. Hot sales of Macans drove Porsche delivery in Taiwan to double to more than 2,000 units in the first half, compared to about 3,300 units in the Asia Pacific (including Taiwan) during the period.