Honda Taiwan Motor Co., a wholly-owned subsidiary of Honda Motor of Japan, recently held a ceremony to celebrate selling more than 150,000 units of the Honda CR-V sport utility vehicle (SUV)in Taiwan, also announcing that it is scheduled to introduce for local assembly in 2016 another light SUV, the Honda HR-V.

Honda, often associated with the affordable but reliable Civic that became popular in the post-Datsun B210 days, is widely deemed locally as the pioneer vendor of SUVs in Taiwan, where the Japanese automaker began selling locally-assembled CR-Vs in 1999, when Honda passenger cars were locally produced by local partner Sanyang Industry Co., Ltd. to have received hot market response immediately. In 2002, Honda Japan decided to terminate its cooperation with Sanyang and set up the wholly-owned Honda Taiwan, which has been locally producing and selling the CR-V. Honda Taiwan locally assembles some models including the CR-V at its plant in southern Taiwan, which was bought from the previous local assembler of Subarus.

More than 150,000 Honda CR-Vs were sold during 2002-2015, making the model a major sales driver for Honda Taiwan. Including the imported CR-Vs sold before the establishment of the local subsidiary, total CR-V sales volume on the island is about 200,000 units. 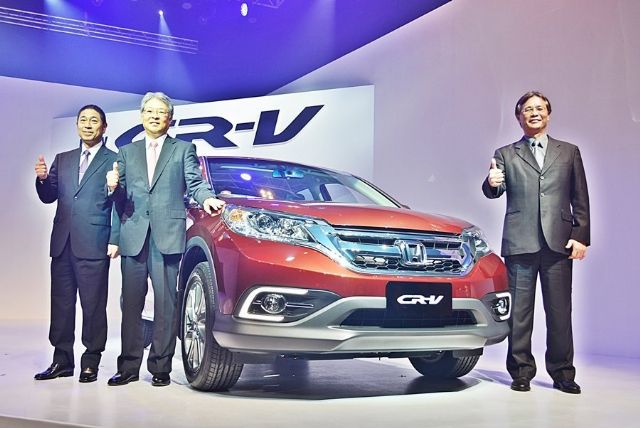 Hisao Kobayashi (second from left), president of Honda Taiwan, introduces the Honda CR-V, the best-selling locally-assembled SUV in Taiwan for many years. (photo from UDN)

Honda has been the No. 1 vendor by volume of locally-assembled SUVs; while Hotai Motor Co. Ltd., local agent of Toyota, has been for years the largest vendor of imported SUVs by volume. During January to August, Hotai sold a total of 12,375 imported Toyota RAV4 SUVs, compared to Honda Taiwan's 8,322 CR-Vs. To further consolidate its leading position in the local SUV segment, Hotai has announced that it is scheduled to launch the mid-term restyled RAV4 in Taiwan in November. In addition to the existing powertrain options, a new hybrid version will be added.

Booming SUV Segment
Incidental to falling fuel prices, and similar to the global market trend, sales of SUVs in Taiwan have been rapidly increasing to become the fastest-growing model segment on the island in the past year or so.

Almost all major brands' SUVs have enjoyed strong sales gains, but all Toyota RAV4 models have held onto top spots with sales increasing year by year without any sign of slowing down. The fourth-generation RAV4 was launched in Taiwan more than three years ago, and the average monthly sales volume of the model has been rising, from 1,215 in 2013 to 1,392 in 2014, with the first-half 2015 average further rising to 1,483 units. 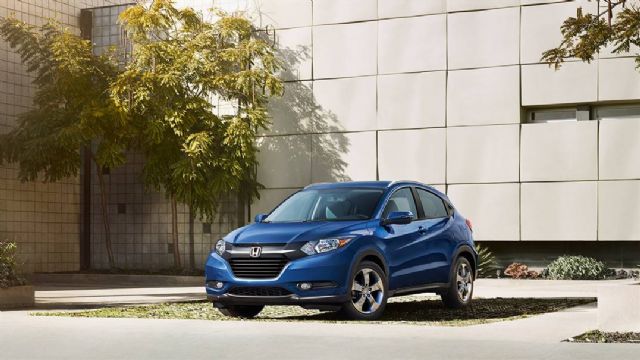 The Honda HR-V crossover is expected to be locally- produced in Taiwan from 2016. (photo from Honda)

Industry experts attribute the rise in SUV sales in Taiwan to falling fuel prices, as well as the replacement-purchase peak in the 10-year cycle on the island, making the SUV the only segment in the domestic automobile market to see positive volume growth recently. Auto vendors' data show that sales of new SUVs (excluding luxury SUVs or LSUVs) in the first six months grew by 7.5% from a year earlier, much higher than the 2.3% growth in the overall market.

The obvious potential in this model segment has also attracted ever more carmakers to join the bandwagon, including locally-assembled ones such as Nissan X-Trail, Ford Kuga, Hyundai ix35, Hyundai Santa Fe, and imports like Toyota RAV4, Mazda CX5 etc. Though sales of Honda CR-Vs have been encouraging, Honda Taiwan has decided to further consolidate its position in the model segment by expanding its product mix.

Chen Jun-liang, sales manager of Honda Taiwan, pointed out that his company is evaluating the introduction of the Honda HR-V into the Taiwanese market, with the  locally-produced model to be launched on the island as early as in the second half of 2016. He explained that Honda Taiwan deems the HR-V very competitive in the domestic SUV market, so decided on local assembly rather than import.

The HR-V light SUV, or crossover, is built on the same chassis of the Honda Fit sub-compact sedan. With the new model scheduled for launch in 2016, coupled with smooth sales of the CR-V (about 12,000 units per year), Chen said Honda Taiwan's annual SUV sales volume in Taiwan is expected to top some 20,000 units.

The sales manager said that it is hard to immediately double the sales volume in the highly competitive SUV segment, unless by introducing new models in another range raise overall market share. He added that the superior brand image and depreciated Japanese yen have enabled Toyota RAV4 to be the best-selling imported SUV in Taiwan in the past six years in a row; while Honda Taiwan is glad to have such strong rival, who can effectively expand the overall market.

Rivals
The Honda CR-V is still facing fierce competition from newcomers in the segment. For more than two years, monthly sales of the Honda CR-V have hovered at the 1,000-unit level; while the new Nissan X-Trail (locally produced by Yulon Motor Co. and vended by Yulon Nissan Motor Co.) immediately won the championship among all locally-assembled SUVs after its launch in May, with monthly delivery volume of more than 1,300 units in May and June, as well as similar monthly volumes in July and August. In only few months after launch, accumulated sales of the X-Trail has reached 4,529 units.

Another strong rival, also locally produced by Yulon Motor, is the group's own Luxgen light SUV, or the Luxgen U6 crossover. After the restyled model with powertrain upgrade had arrived in showrooms in April, monthly sales of the Luxgen U6 Eco Hyper crossover immediately rebounded to more than 1,000 units, making it the best-selling Luxgen model. In the first eight months, accumulated sales volume of the U6 (including pre- and post-restyle) reached 6,809 units.

Imported light SUV or crossovers are also taking some market shares, including the Ford EcoSport, Skoda Yeti, and the upcoming Mazda CX-3 (reportedly to be equipped with optional diesel engine).

Industry insiders say that if things go to plan, the locally-assembled Honda HR-V powered by a 1.5L gasoline engine will be the first locally-produced model in such displacement range with higher price- competitiveness over same-class imports. The prices for locally-assembled HR-V is expected to be kept sub-NT$700,000 (US$23,000), the sources say. In contrast, the sources note, changing driving habits in Taiwan have resulted in the fast-shrinking sales of locally-assembled passenger cars. Through the introduction of the new HR-V, they add, Honda Taiwan also expects to offset revenue loss resulting from decreasing passenger-car sales on the island.